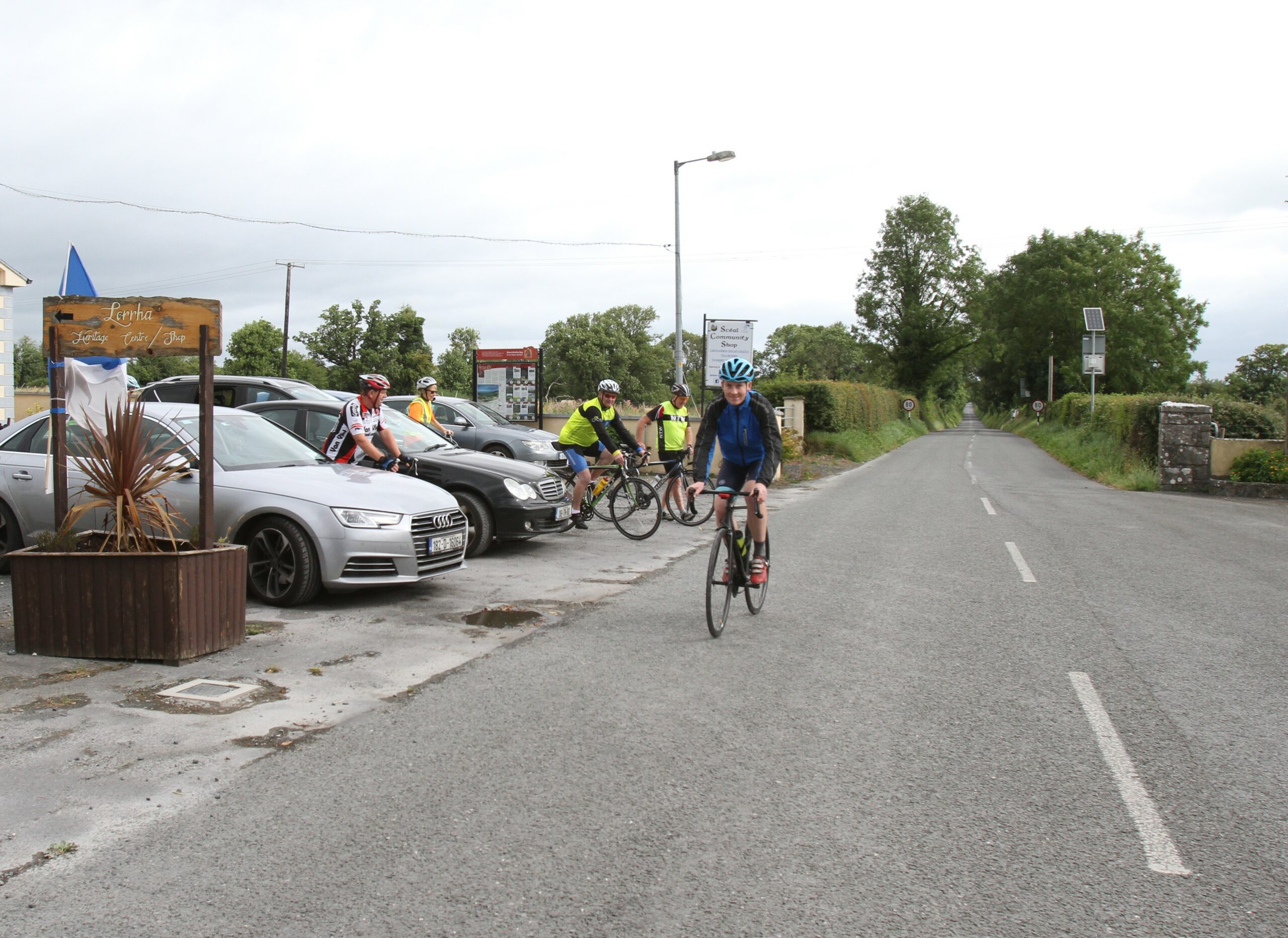 Lorrha man Sean Molloy leading out the cyclists on Sunday last during the launch of the Lorrha Cycle Road Trip. A full report can be read in the local papers – Nenagh Guardian and Midland Tribune. Photo by Rose Mannion

The Lorrha Dorrha parish cycle road trip was launched on Sunday last. Consisting of 46 km (approx) trip around the roads of the parish. There’s a leaflet in the Sceál shop/Community Hall in the village with a map of the route that the cyclists can take and they can also view the many places of interest along the route.

Preparations continue for the visit of Martin O’Meara’s VC to Lorrha on Saturday 13th August. This will be a once off occasion where everyone can come along and view the VC before it is returned to Australia. The committee are working hard behind the scenes to ensure that everything runs as smoothly as possible on the day. Many thanks to everyone who have supported our fundraising efforts to date.  The collection buckets which are available in Scéal shop, Friars Tavern, Pat Hough’s, Kelly’s Rathcabbin, Ferry Inn and  Mulrooney’s Ferry Service Station will remain in place for another few weeks for anyone wishing to make a contribution to the homecoming. The committee also has a Go Fund Me page. https://www.gofundme.com/f/homecoming-of-martin-omearas-vc Your support is much appreciated. You can follow us on www.lorrhadorrha.ie or on Facebook https://www.facebook.com/groups/403195614992761.

Well done to William Holmes, son of Marie and John, Rathcabbin who won gold at the Munster Fleadh which took place in Newcastlewest recently.  William is a talented musician and is well known on the music circuit as a fiddle player. However, this time he took the gold with the Mouth Organ. William is a member of Roscrea Comhaltas . Well done William and all the best in Fleadh Cheoil na hÉireann in Mullingar which takes place from 31 July – 7 August.

Liam aiming to get back Liam.

On Monday evening July 18th. the management committee of Tipperary GAA appointed Liam Cahill Ballingarry, as Tipperary senior hurling manager for a three-year term. Liam first became involved in inter county management in 2007 as a minor hurling selector with Tipperary and later went on to manage the minor hurling team between 2014 and 2017, winning two Munster and one All Ireland title.  He went on to manage the Tipperary under 21 hurlers in 2018 winning the All Ireland that year. In 2019 Liam guided the Tipperary under 20 hurlers to Munster and All Ireland titles in what was the inaugural year of the competition. Between 2020 and 2022, Liam was the manager of the Waterford senior hurling team where he guided his side to Munster and All Ireland finals in 2020 and a national league title in 2022.
Joining him on the management team will be Toomevara’s Michael Bevans who has worked with Liam as a coach for a number of inter county teams in the past. Also joining him will be three times All Ireland winner and six time All Star, Padraic Maher from Thurles/Sarsfields club. Maher was forced into retirement earlier this year because of injury. Declan Laffan from Loughmore/Castleiney and Clonoulty/Rossmore man TJ Ryan will complete the line up.   No doubt, Cahill and his team will leave no stone unturned in their effort to bring the Liam McCarthy cup back to the Premier County.
It’s no secret that Cahill wanted this job for some years now but there was always some obstacle in his way. Now however his time has arrived and hopefully there will be more players from the Lorrha club donning the Tipp jersey alongside Brian and Bonner next season.

U12 have their last group match before the semi finals the weekend of August 6th . They face Shannon Rovers this Wednesday in Ballinderry. Our U 12 team have been selected to play in Croke Park as part of the Tesco sponsored Caman to Croker event on the 16th August , this is a great opportunity for the girls, some of whom have also played in Semple Stadium and The Ragg camogie grounds this summer.
Our U 15 Summer league has gotten off to a tough start for the girls with 2 defeats , they face Knockavilla on the 4th of August at home.
Best of Luck to Emma Kennedy and Ella O Meara who will take part in the All Ireland Camogie Series, lining out for Tipperary U 14s on August 6th.
Please support our EuroMillions fundraiser run in conjunction with the GAA club, for every ticket sold by a camogie club member will go directly to Lorrha Camogie Club funds.  Each book seller is entered into a draw for a 3 night trip to New York , sponsored by David Fogarty House Fitness.  Contact Caroline on 087 2345817 to purchase a yearly ticket that allows you enter the EuroMillions draw twice a week, for the next 52 weeks.

Denis, Tommy and Stephen before taking off from Malin Head last week. Full report can be read in the local papers – Nenagh Guardian and Midland Tribune

On Their Bikes Part Two.

The two Lorrha men, Denis Maher and his neighbour Tommy Houlihan who cycled from Malin in aid of Pieta House and back in their saddles since Monday morning as they take on part two of the trip.  The men are accompanied on their journey by Stephen Houlihan (Tommy’s nephew) who is providing back up supplies for the long journey. The men are delighted with the response they have received from the public towards their fundraising page so if you would like to donate you can do so on idonate.ie/thomas-denis. Follow them too on facebook at Thomas & Denis Cycle Malin to Mizen Head in Aid of Pieta House. Their target of €2000 has so far passed all their expectations for which the men are thankful for.

Well done to the Lorrha Intermediate team and mentors who had a great win 3.23 to 1.13 over Carrick Davins in the first round of the championship. They get a two week break before their second outing.

Join over 1000 young people between 16 and 35 this August at the Youth 2000 Summer Festival. The festival takes place in Clongowes Wood College, Clane, Co Kildare from Thurs 11th August to Sun 14th August 2022. For more information and to book your place, go to www.youth2000.ie

Well done: To the intermediates on their win over Carrick Davins in the group stage of the county championship. The lads are out again in a fortnight’s time.

Social dancing: Continues this Friday at 9.30 to the music of Michelle Murphy.

Sympathies: To the Gleeson and Killeen families on the death of Betty Killeen, Abbeyville.

Junior hurling: Host Nenagh in Lorrha on Friday at 7.30. A win will give them a good chance of making it straight through to the semi-finals.

Euro-Millions: All sold books of tickets are to be returned on Friday after the junior match and if not by then, they must be in by next Tuesday if you want to be in the draw for the trip to New York. 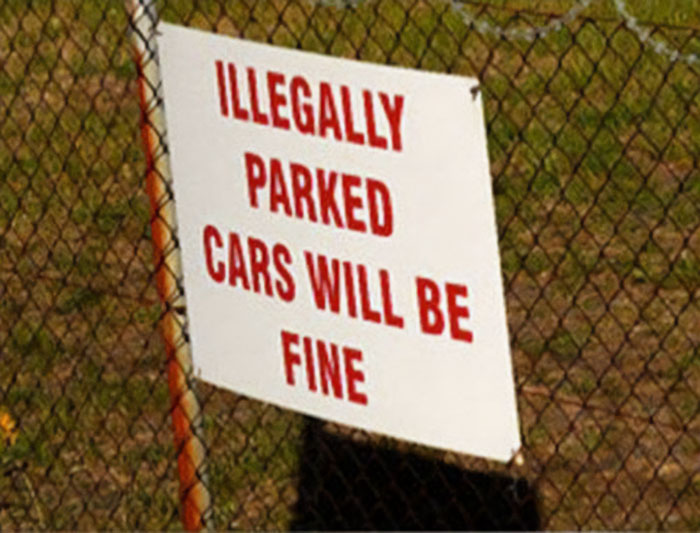