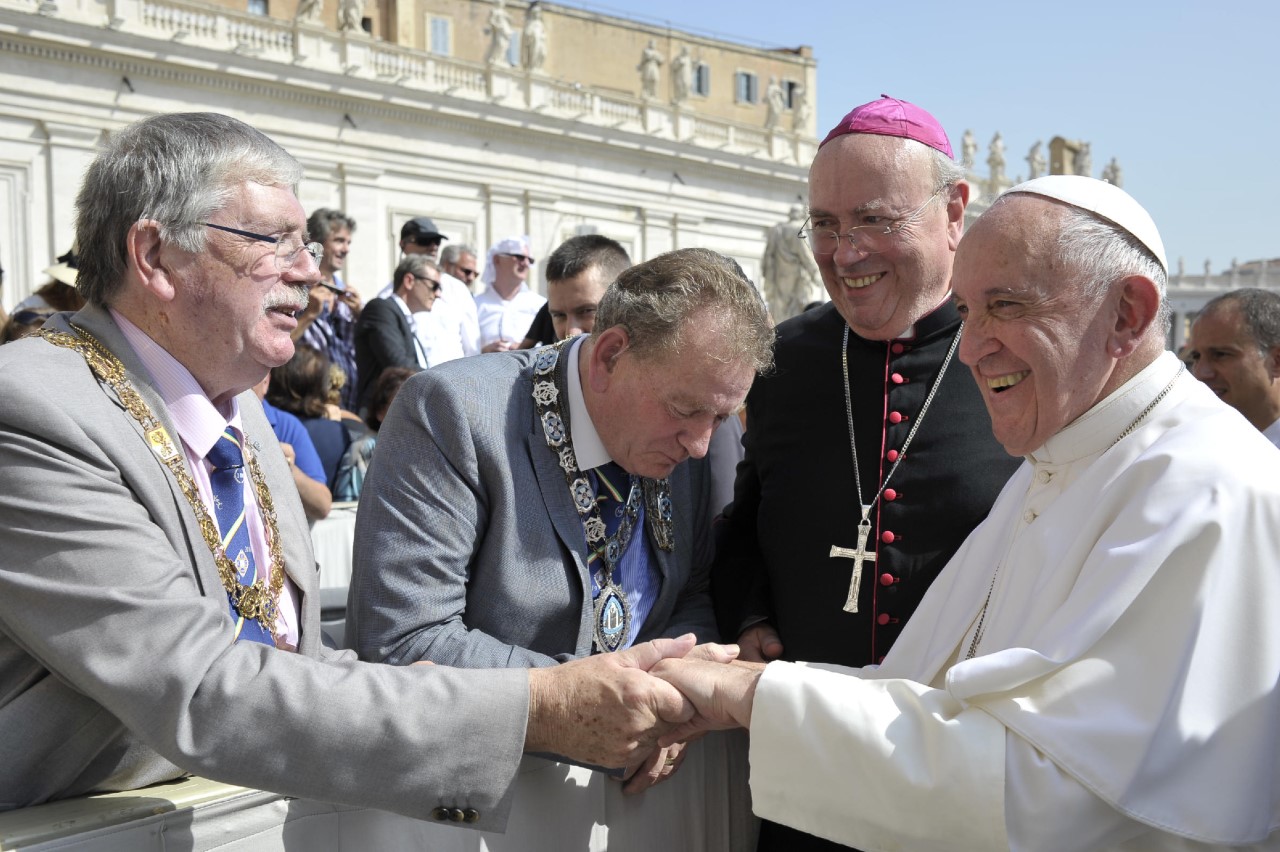 Many people in Lorrha know and remember Bertie Grogan who was born and raised in the village and who emigrated to England many years ago. As Bertie is a regular visitor back home to visit his brother Anthony who still lives in Lorrha, his sister Terry and family who reside in Kildare and all his relatives around the parish along with his wife Paulines’s relatives in Birr, Bertie is no stranger. He is now delighted to share the good news with us all that a Papal Knighthood—Pontifical Equestrian Order of St Gregory the Great(KSG) was bestowed upon him by Pope Francis.
The presentation was presented by Archbishop Malcolm McMahon OP in Liverpool Cathedral of Christ the King in recognition of Berties work as Supreme Knight (CEO) of the Knight of St Columba UK and the Catholic Church in Britain.  Due to Covid-19 the presentation was delayed. In attendance were over 150 of the “Knights” with visiting Knights of Columbcille (Ireland) along with the President of the International Alliance of Catholic Knights Charlie McCluskey KSG.(IACK)
The Pontifical Equestrian Order of St. Gregory the Great was established on 1 September 1831, by Pope Gregory XVI, seven months after his election as Pope. The order is one of the five orders of knighthood of the Holy See. The honor is bestowed upon Catholic men and women (and certain notable non-Catholics) in recognition of their personal service to the Holy See and to the Catholic Church, through their unusual labours, their support of the Holy See, and the examples they set in their communities and their countries. Well done Bertie and keep up the good work. 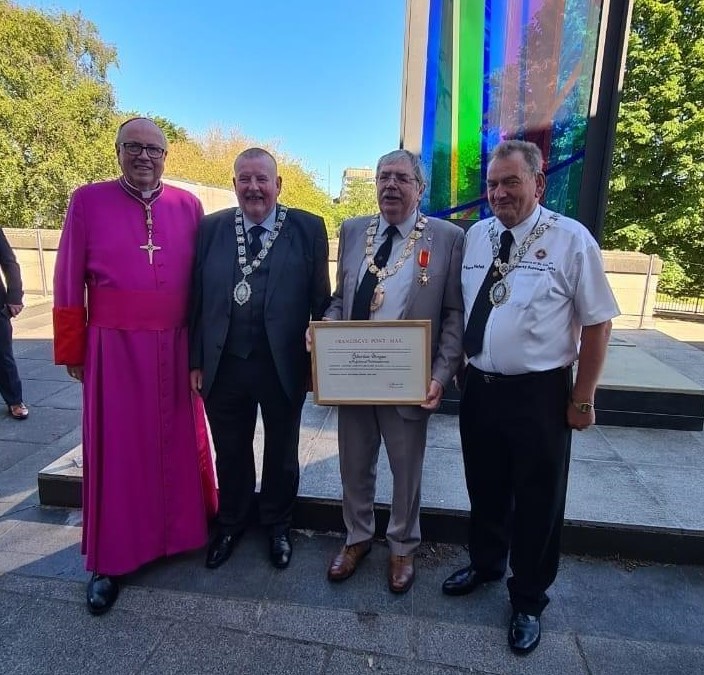 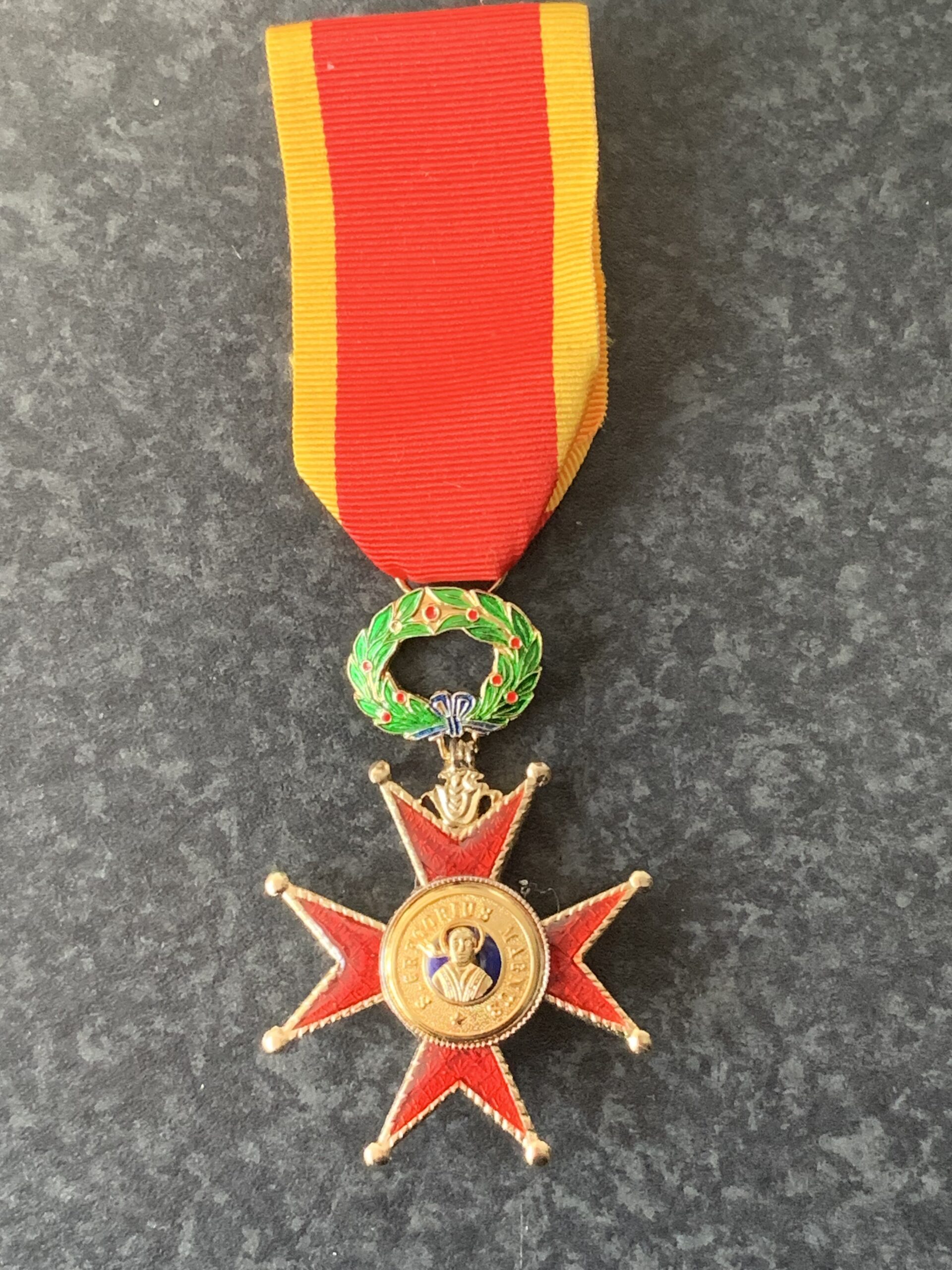 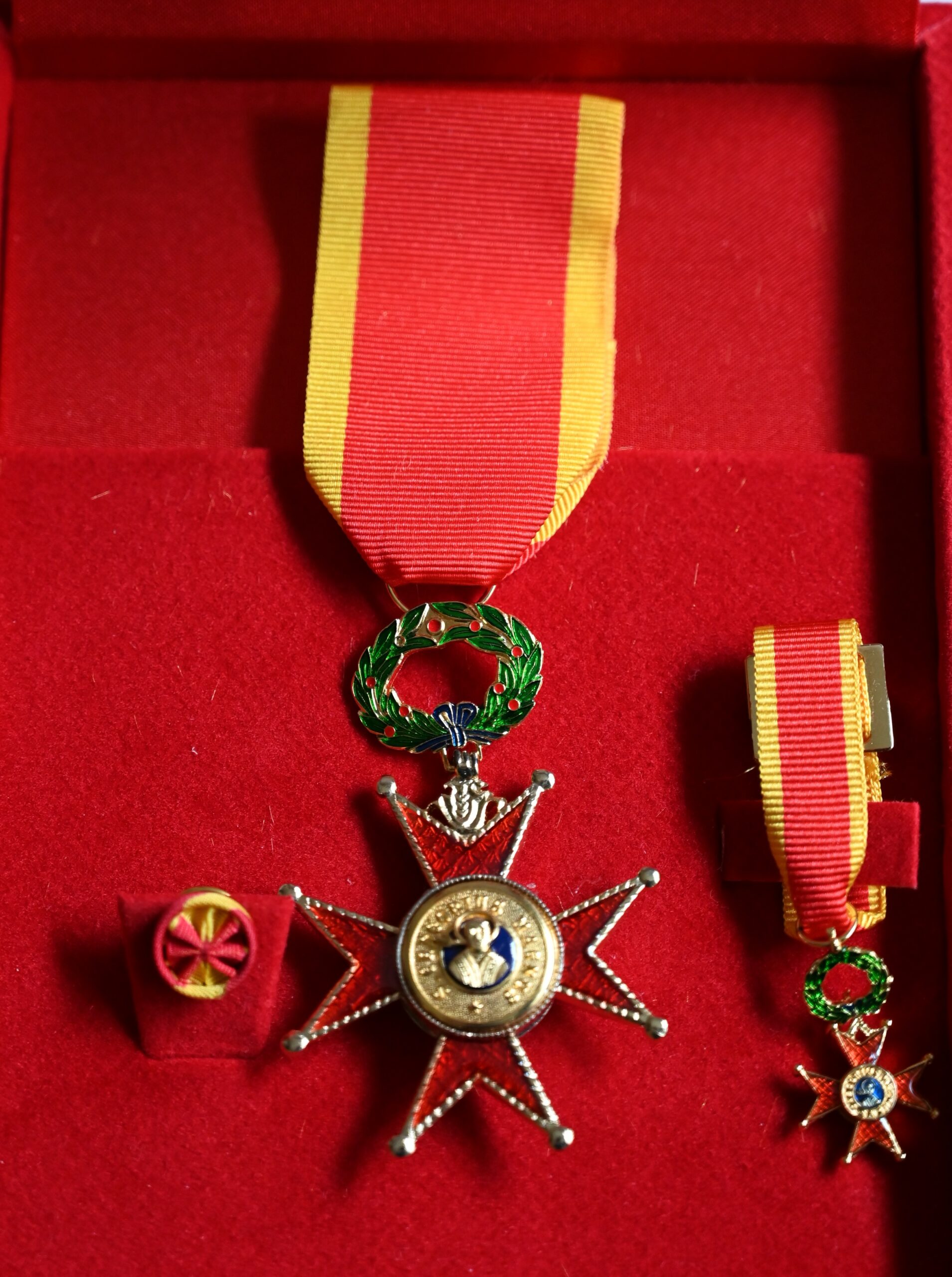 The unexpected death took place on Thursday 12th January of Peter Gaynor, 4 Chapel Lane, Killimor and formally of Lorrha.
Peter was born and raised at Mill Farm, Lorrha where he spent most of his young life. He emigrated to England a young man and spent many years there returning home to visit relatives on occasions over the years. He retired from work in 2014 and returned to Ireland in 2015 settling in nearby Killimor where he was able to visit his native parish many times.
Although in ill health for some time, his death was unexpected and came as a shock to his family.
Peter is survived by his sons Derek, Patrick and John, daughter Lena, grandchildren, daughters in-law, cousins, relatives and friends to whom sympathy is offered.
After funeral Mass in St. Ruadhan’s Church, Lorrha on Monday 16th burial took place in the adjoining cemetery. May he rest in peace.

Sympathy is extended to Freda Kinsella and family, Carrig on the sudden and unexpected death of her first cousin Lucinda (Enda) Kilbride, née Ryan, Mullingar and formerly Lorrha, which occurred on Sunday January 15th.
Enda who was 81 years of age, was born to Patrick and Josephine Ryan and raised in Abbeyville. She attended school locally and was always friendly and kind hearted where she and her family were great neighbours.
She was pre-deceased by her parents and her sister Pauline and is survived by her husband John and family Yvonne, Shane,Traci and Paul, grandchildren Conall, Lucia, Emma, Kallen, John, Zach and Aimee, her twin brother Denis (Beleen, Nenagh), daughters-in-law Sabine and Triona, son-in-law Niall, sisters-in-law, nieces, nephews, neighbours, relatives and wide circle of friends. After funeral Mass in the Cathedral of Christ the King, Mullingar, on Thursday 19th  burial took place in Ballyglass Cemetery. May she rest in peace.

Mass times in our parish are as follows. Monday Mornings at 9.30am in Lorrha Church (except Bank Holidays). Every Saturday evening at 6.30pm in Lorrha Church. Every Sunday morning at 11.30am in Rathcabbin Church.
Anyone wishing to book anniversary masses, months minds, weddings, christenings etc, please contact the Church Sacristan, in Lorrha Agnes Slevin, in Rathcabbin Mary Cleary and in Redwood Val O’Meara.
Day return bus to Divine Mercy conference Saturday 18th February. Fantastic international speakers, great day of spiritual inspiration and refreshment. €80 for bus and entry ticket. Contact: Seamus 087-2752578 for more info
ALONE is a national organisation that strives to enable older people to age at home safely & securely, We work with all older people, including those who are lonely, isolated, frail or ill, homeless, living in poverty, or are facing other difficulties. If you are an older person who would like to learn more about this service, please call ALONE’s National Support Line on 0818 222 024.
ALONE’s Visitation Support & Befriending Service matches older people who would like additional social contact with a volunteer who provides companionship through a weekly visit. We If you would like to volunteer with ALONE see the volunteer section of the ALONE website at www.Alone.ie or email Aoife.Dennehy@alone.ie for further information.
Trip to Medjuorge.
A seven day trip to Medjourge will take place from 21st June 2023. The cost is €795 which includes flight and accommodation with meals included. Bus journey now only 25 minutes from Mostar to Medjourge. For further information contact Marie Fogarty on (087) 2826088.

The North Tipp ploughing committee are holding a meeting on Wednesday night 25th January at 8.30pm in The Yanks, Borrisokane. All members are requested to attend.
The meeting will be looking at the availability of a suitable site for the forthcoming Championships which will take place on Sunday 5th March. If anyone has a site or knows of a suitable venue, please call the secretary Denis Cahalan on 087 779 3719.

Congratulations is extended to Pat Burke, Rathcabbin on the occasion of his 40th birthday. Pat celebrated the occasion with family and friends at a birthday bash which was thrown for him by his wife Clare, in Dooly’s Hotel, Birr on Saturday night last where a large contingent of cousins arrived over from Wales for the happy event. Well done Pat and good health and fortune in the years ahead. 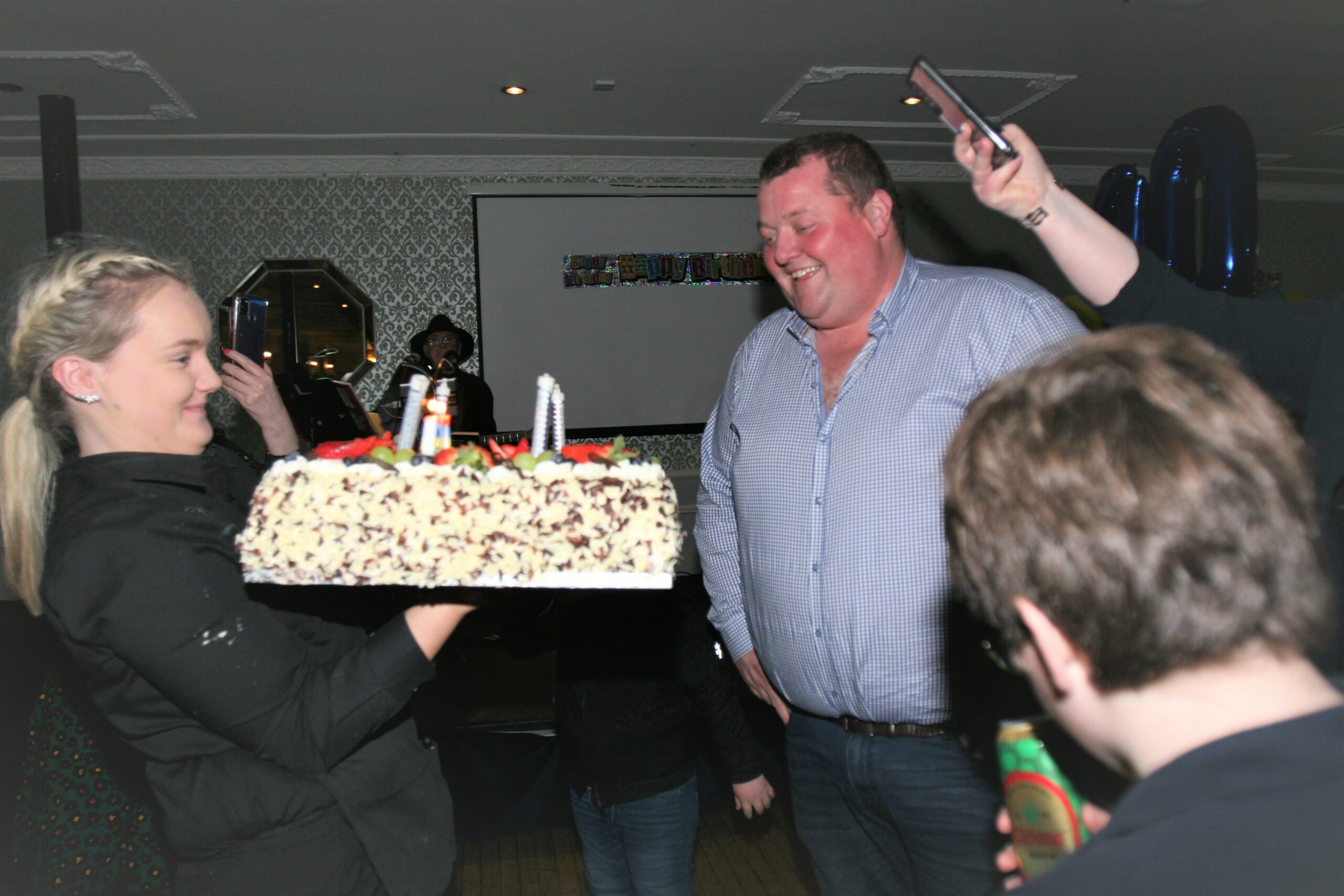 Members of Rathcabbin Players are busy rehearsing for their forthcoming production of the well known comedy ‘Perfect Wedding’. Written by Robin Hawdon and directed by Banagher man Jarred Madden, the play will be staged in Rathcabbin Hall from Thursday 23rd February to Sunday 26th February.  Watch this space for further details.

The committee are holding an Progressive 25 card game on St. Patrick’s Night 17th March at 8.30pm. All are invited.
February 23rd to 26th Rathcabbin Players.
Any club or organization wishing to book the hall for meetings or events can call (087) 1364936.

At our recent AGM the following positions we confirmed for 2023.Chairperson – Caroline O Brien, Secretary – Pauline Hoctor., Assistant Secretary- Rebekah Lambe, Treasurer – Aoife Brady, Assistant Treasurer -Michelle Hogan,  PRO – Celine Cleary.
The club would like to thank the Coaches, Mentors, players and parents for the commitment that was given to our Adult and Underage teams during 2022. Well done to all girls who represented our club at county level during the year and continued success to Clodagh McIntyre as a member of the Tipperary Senior panel. The camogie club would also like to acknowledge the support of our GAA club and  thank those who provided donations /sponsorship during the past year.

Do You Love To Sing?  Banagher Trinity Gospel Choir are looking for new members to join their production ‘An Evening With Elvis’ which will take place on 12th April in Banagher College. If you love to sing and would like to join, email corrinnejane@gmail.com or text (087) 3364418.

Redwood NS Open Evening will be held on Tuesday 21st February from 7- 8.30pm. We invite any families and children hoping to enrol in September 2023 to come along. It is the ideal opportunity to visit the school, meet the staff and view the resources available to students. Enrolment forms will be available on the night and can also be downloaded from our website www.redwoodns.ie If you cannot attend on the evening or would like any other information, please call (090) 9747186 or e-mail principal@redwoodns.ie

Garda Vetting: is required if you wish to be involved with any juvenile or camogie teams, and it must be renewed every three years. Contact child welfare officer Tom Kennedy (0879191689) if interested.

Social Dancing: Continues this Friday night in the Tony Reddin Centre at 9.30pm to the music of Peter Burke.

In 1624 the first submarine was publicly tested on the Thames for James 1.

The Sun is 400 times further away from Earth than the moon is.

Barack Obama had the most followers on Twitter of any world leader in 2016 – his last year in power. 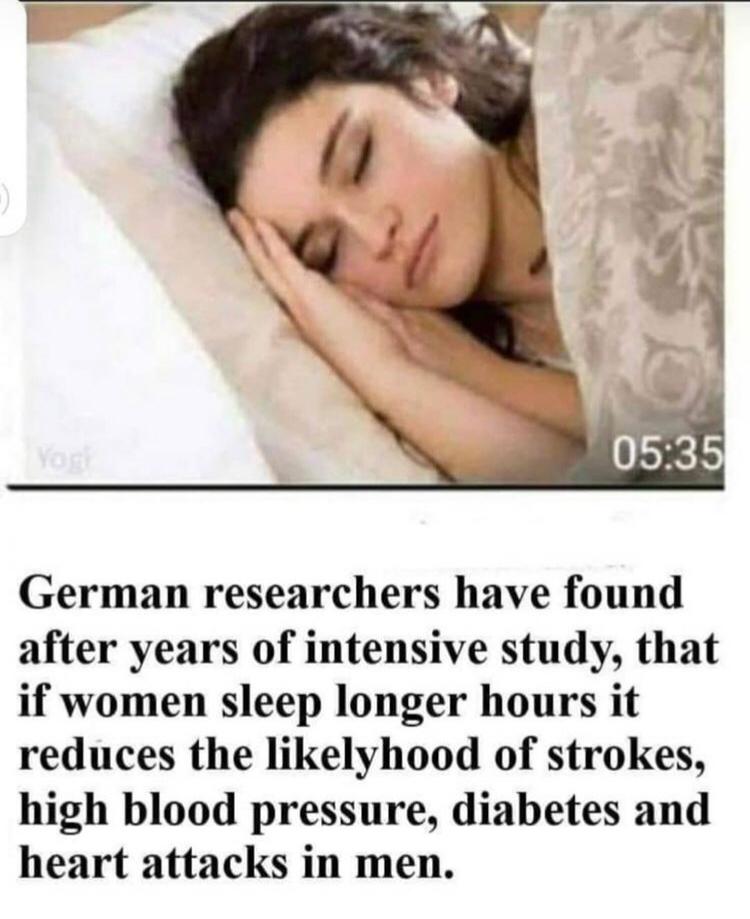