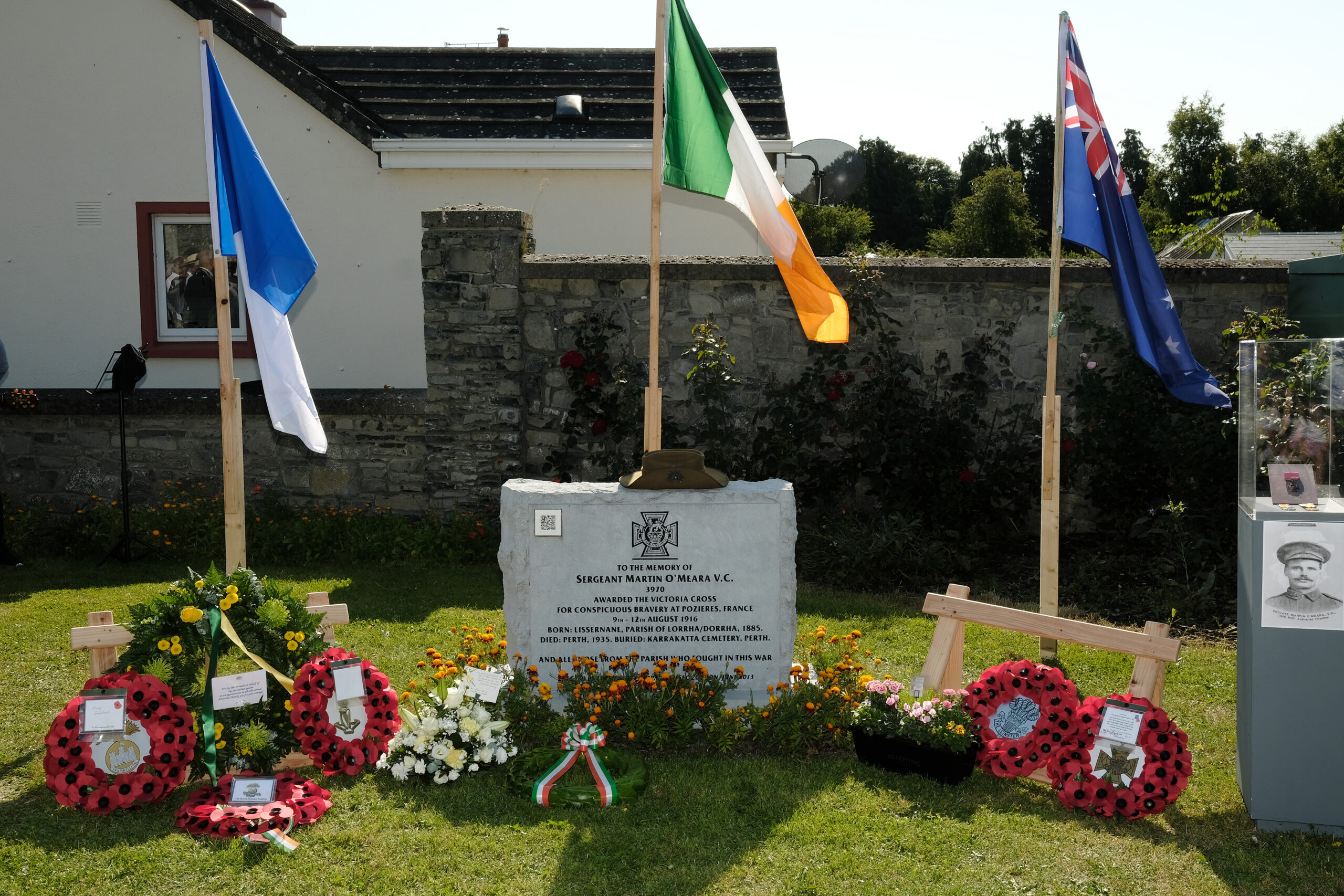 After the wreath laying ceremony during the visit of the Martin O’Meara VC to Lorrha on August 13th. Pic: Rose Mannion.

The death occurred of Paddy Hough Ballyurra, Kilrush and late Ballymacegan, Lorrha after a long illness on Monday 15th August.
A carpenter by trade, Paddy left Lorrha like so many in the early 60’s and made his home in Bristol with his wife Peggy and sons Dermot and Mark.  In 1997 Paddy and Peggy returned to Ireland and set up home in Kilrush.

Illness struck Paddy in 1979 when he was diagnosed with Multiple Sclerosis.  With his quiet and unassuming nature he accepted and lived with this disabling disease for 44 years. Paddy left a significant impact on the lives of many with his courage, determination, and positive mind-set.
Predeceased by his parents Paddy and Nora and his brothers Willie (Birr) and Tom (Roden), he will be greatly missed by his devoted wife Peg who cared for him in their home for many years, his sons Dermot and Mark their wives Shelly and Sinead, grandchildren Caitlin, Liam, Oisin and Aoibhinn, brothers Martin (Curragha),Mike (Ballymacegan), sisters Mary (Dublin), Phyllis (Ballyshrule),Teresa (London ,) Carmel (Woodford), Nieces, nephews, in-laws, relatives, friends and neighbours to whom sympathy is offered.
After funeral Mass in St. Senan’s Church, Kilrush on Thursday Aug. 18th  burial took place in Kilmurry McMahon Cemetery. May Paddy’s Soul rest in peace.

Late Paddy Corrigan.
The unexpected death took place on Thursday 18th August at the University Hospital Limerick of Paddy Corrigan, Kilfadda, Lorrha. The suddenness of his death came as a great shock to his family who considered him to be a healthy and fit 75 year old man who cycled the round trip every day from his home in Kilfadda, to Portumna. Paddy was a well read man and kept up to date with everything that was happening in the world, by reading and listening to world affairs. He always had a smiling friendly face and he loved to meet and chat with people and have the bit of craic. He was a happy go lucky man who didn’t take life too seriously and was well respected and liked by all who knew him.
Predeceased by his parents Julia and Hugh, brothers Hubie, John and Martin, sister Mary. He will be sadly missed by his sister Kitty (England), nieces, Susan Darcy (Portland), Sinead (Limerick), nephews,  Gerard, Brian, Eoin and Donnacha (Limerick), Philip, Seamus, David (England), grand nieces, grandnephews, great-grandnieces, great-grandnephews, relatives, neighbours and a large circle of friends to whom sympathy is offered.
After funeral Mass on Tuesday last 23rd in in St. Ruadhan’s Church, Lorrha, burial took place in the adjoining cemetery. May Paddy’s Soul rest in peace. 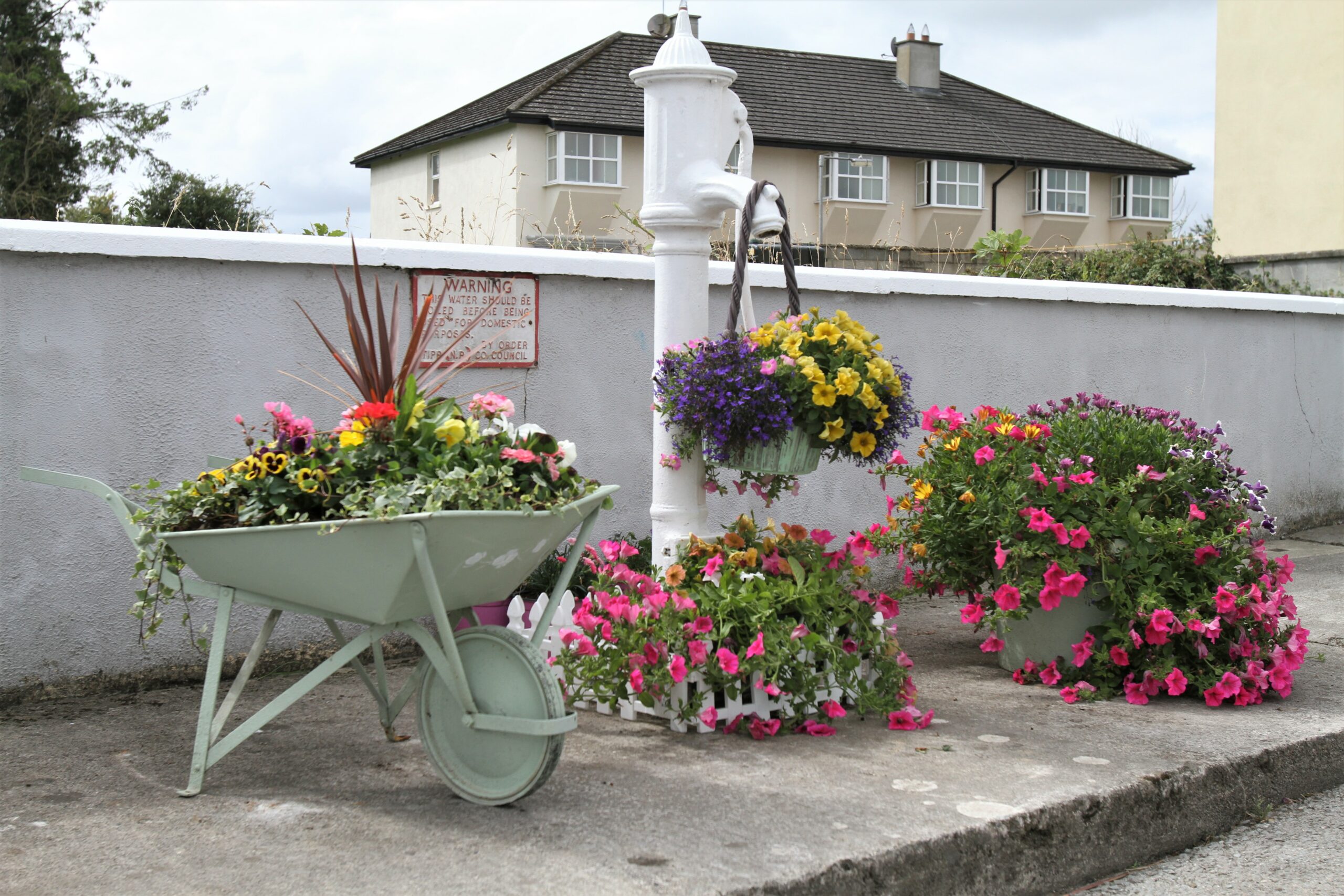 This lovely pump feature in Rathcabbin has caught the admiration of many who pass by it daily. Of importance to the feature is a steel wheelbarrow dating back over 80 years. The wheelbarrow was made by the late Fr. John Donnelly when he was a young metalwork student.  Fr. John gave the barrow to his minder, Denise Clancy, a few years ago and she has kindly loaned it to Rathcabbin Development where she tends to it with tender loving care every day and where it is enjoyed by all. Pic: Rose Mannion.

Hospice Coffee Mornings Are Back.

This year sees the 30th Anniversary of the Hospice Fundraising Coffee Mornings. Together for Hospice, The National Hospice Movement represents 26 Hospice and specialist palliative home care providers supporting patients and their families nationwide. Funds raised locally stay local and go back into each local hospice service, helping to pay for medical and general staff, palliative care beds, home care visits, specialist equipment and new hospice builds.
Communities right across North Tipperary are urged to simply gather a group on Thursday, September 22nd, and do coffee your way, to help raise much needed funds to support the work of North Tipperary Hospice Movement.
Eileen Kennedy, secretary of the North Tipperary Hospice Movement said: “We are delighted Bewley’s Big Coffee Morning Social for Hospice is back for another year raising funds in support of Hospice in-patient and community services around Ireland.
“The ongoing support for this campaign over the last 30 years is a testament to the generosity of our coffee morning hosts, donors, ambassadors, and our long-time sponsor Bewley’s. The funds raised each year by the Irish public ensure we continue to provide vital support to individual patients and their families every day”.
To Register to host a coffee morning on Thursday, September 22nd, or on a date that suits you, go to www.hospicecoffeemorning. ie or Callsave 0818 995 996. Hosts are provided with a free Coffee Morning Pack containing Bewley’s coffee, posters and invitations.

Well Done.
Congratulations and well done to the Intermediate team on their great win over Golden Kilefeacle in group 4, round 2 of the championship on Saturday last. Final score Lorrha 3.19, Golden 0.11.
Best of luck to the Junior team and management when they meet Silvermines in the North Semi-Final on Saturday 27th in Tony Reddin Park.

Congratulations and many good wishes is extended to Caroline Naylor, Rathcabbin, daughter of Terry and Bernie, and Darragh Egan, Ballingarry who were married on Saturday last August 20th.  The happy couple celebrated their wedding in the Pike Church, Ballingarry and afterwards in the Hudson Bay Hotel, Athlone with family and friends and a great time was had by all. We wish Carrie and Darragh the best of luck in the years ahead.

Best of luck to our U12 girls who take on Mullinahone in the U12 Cu Final in Holycross Sunday 28th August, time TBC. It has been a busy few weeks for the girls who played a tough semi-final in The Ragg, overcoming Slieve Felim with the last puck of the ball by Captain Nadine Guinan that found the net. During the week they headed to Croke Park to take part in the Tesco Caman to Croker Blitz event , where they were chosen as one of 64  camogie teams from across Ireland  to play on the famous turf. They had 3 competitive games and displayed their hard working and scoring ability in each , a great day was had by both parents and players, as well as a memorable bus trip.
Well done to Emma Kennedy who captained Tipperary’s U14 team in their cup final victory over Galway in the Orla McDonagh Memorial Tournament , Dr Morris Park Sat 20th August. She earned the position as captain through her hard work and determination over a busy summer of games for Tipperary. Congratulations also to Sophie Houlihan and Ella O’Meara who also won their Shield Final with a victory over Wexford. A proud weekend for the club to see three players lining out for the Tipperary U14s. Well done also to the U15 team who travelled to Cashel Thursday evening and put in a complete performance to come away with a victory.
Our first Junior ‘A’ championship game with be Sunday 28th August at 12 noon v Ballina in Moatfield , best of luck to Padraig Madden, Aiden McIntyre and the management team , all support would be greatly appreciated. A big thank you to all who supported our EuroMillions fundraiser, the proceeds of each ticket purchased from a camogie club player or member goes directly to camogie club funds.

First Friday Mass will be celebrated in Lorrha Church on Friday 5th August at 8pm.

On Tues 6th Sept there will be a conference on Zoom hosted by ‘The Hook of Faith; The topic will be: ‘Supporting Catholic Parents: Sharing the Catholic Vision of Love &Human Sexuality with Our Children’. The speaker Fr Chris Hayden, author of ‘A Better Vision: Understanding &Living the Catholic Vision of Human Sexuality’. The conference will be from 8 -9pm. All are welcome. Email: thehookoffaith@gmail.com . It is designed to help Catholic parents be the best educators of their children in the areas of faith and morality in our modern culture.

Youth Ministry Coordinator in the Diocese of Limerick – (Three-year fixed-term fulltime contract): The Diocese is recruiting a Youth Ministry Coordinator.  The successful candidate will work on the delivery of the objectives & actions of the Young People theme in the Diocesan Pastoral Plan. An Application Pack with Job Description & Application Form  are available on www.limerickdiocese.org/news/vacancy-for-youth-ministry-coordinator/. 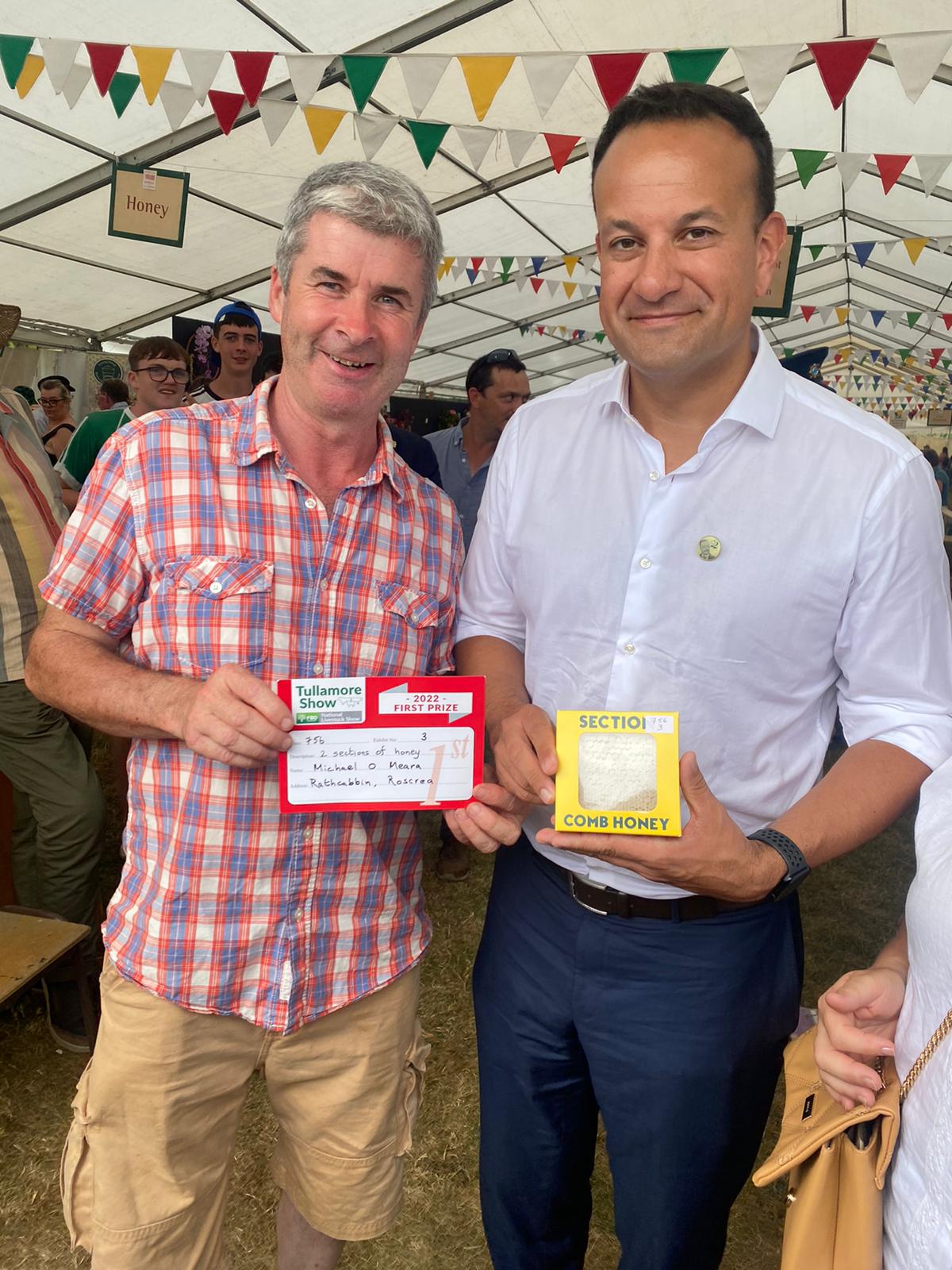 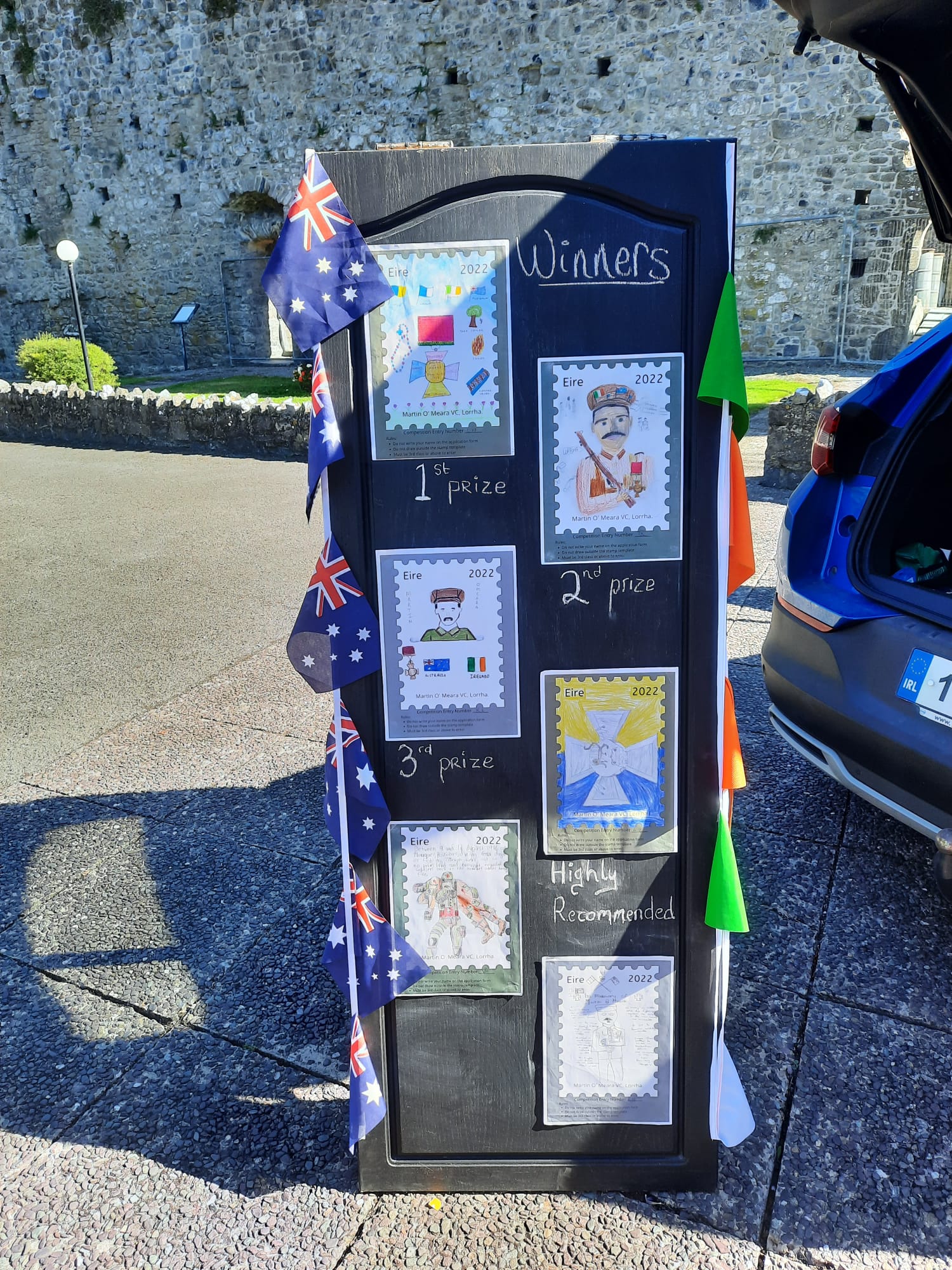 The winners and runners-up of the Martin O’Meara Stamp Competition.  Pic: Rose Mannion.

Intermediate: Well done to the lads on their 3-19 to 0-11 win over Golden-Kilfeacle in round 2 of the County Championship on Saturday. They will take on Boherlahan-Dualla in their final group game in a fortnight’s time.

Junior Hurling: The Junior ‘B’ hurlers take on Silvermines in North semi-final on Saturday in Lorrha at 6.00pm. It’s an all-ticket game and can be purchased through the North Board ticket site. Car-parking will be available in the field across the road.

Social Dancing: Continues next Friday night at 9.30 to the music of Noel Briody. 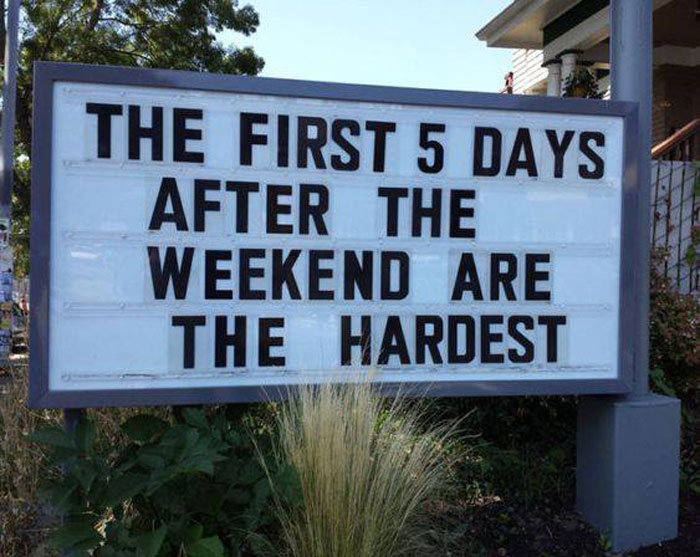