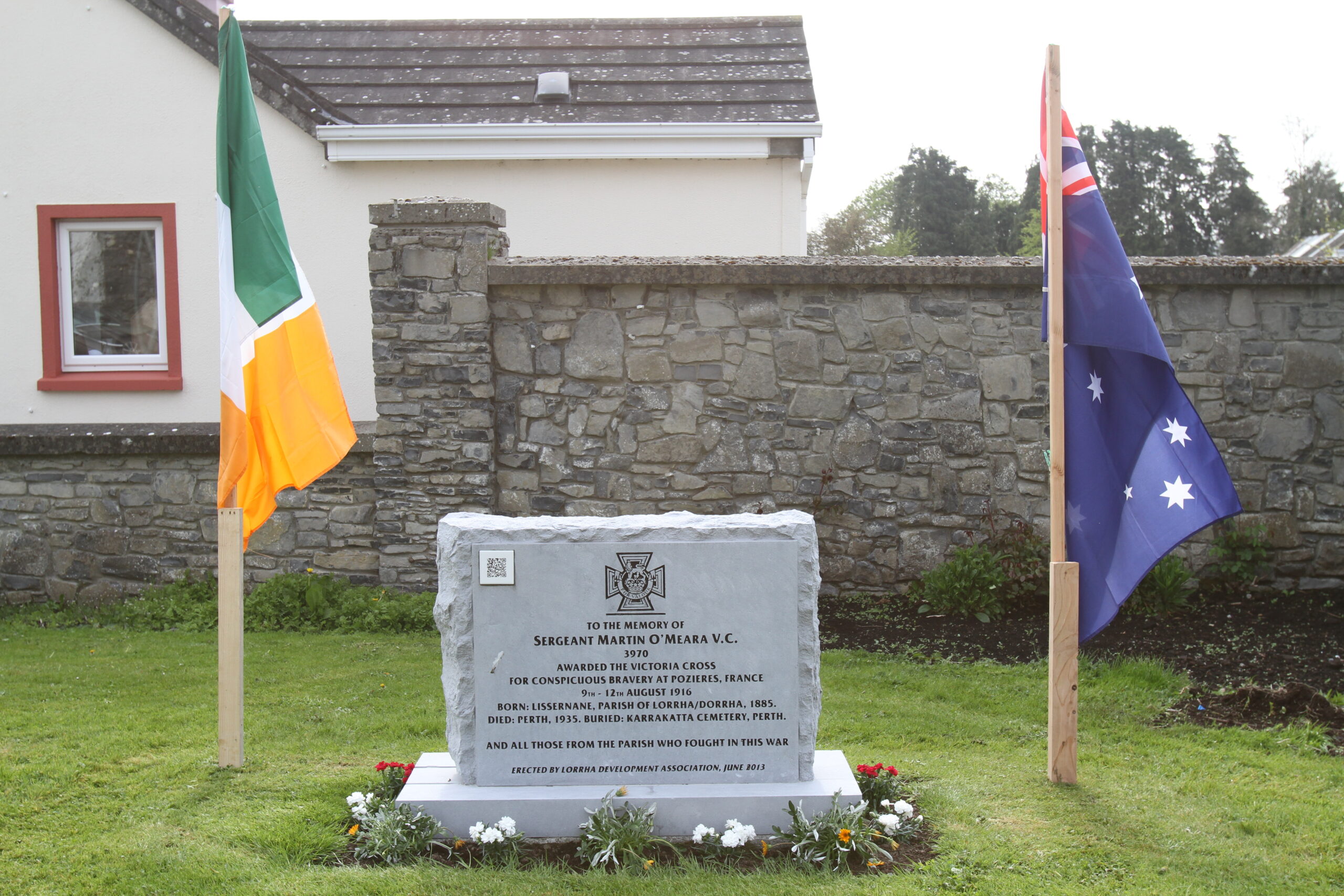 A Date has been Announced.

The Lorrha Martin O’Meara VC committee have at last received confirmation that Saturday August 13th has been designated for Martin’s VC to visit Lorrha.  The committee have waited a long time for a date to be confirmed and are delighted to receive this news. From here until the VC arrives, there will be plenty of work taking place, plaques erected, bunting and flags to suitably decorate the village for the one and only visit of the VC and much more besides. This will be a huge event for not just the village but also the parish and beyond where everyone is invited to attend.  However, all of this costs money which will be spent wisely in the preparations. In order to support the hard working committee, your attention is drawn  to the collection buckets which are available in Sceal shop, Friars Tavern, Pat Hough’s, Kellys Rathcabbin, Ferry Inn and Mulrooney’s Ferry Service Station for anyone wishing to make a contribution to the homecoming. The committee also have a Go Fund Me page which is in operation at  https://www.gofundme.com/f/homecoming-of-martin-omearas-vc or by typing in Homecoming of Martin O’Meara’s VC  Go Fund Me Page, to help raise the necessary funds required. Do please contribute if you can as all funds will be needed. Your support is much appreciated. You can follow us on www.lorrhadorrha.ie or on facebook  https://www.facebook.com/groups/403195614992761.

The best of luck to Clodagh McIntyre and the Tipperary senior camogie squad who play Cork on Saturday coming July 2nd in Páirc Uí Rinn at 5pm. in the All Ireland Series. This is a must win game for Tipp and they will have their work cut out taking on the Leesiders who top the group after winning all their group games so far. Can Tipp knock them off their perch? It’s a big ask but it can be done so good luck to all.
We also congratulate Emma Kennedy and Ella O’Meara who are representing Lorrha camogie with the County U14 A and C teams. Emma and the A team won their Munster final recently. Emma was also named Junior Camogie Player of the year for Portumna Community School. Well done Emma.
We also wish the Lorrha Intermediate hurling team and management the best of luck when they play Moneygall in the North Intermediate semi-final next Sunday  July 3rd at 7pm.

Three young men from Rathcabbin are making waves in the world of athletics in recent weeks. Tom Perry  recently competed in the Leinster U-18 championship which were held in Tullamore and Tom took gold in the 800m and silver in the 1500m. He will go on to compete at the National finals in July. Brothers Paddy and Willie O’Meara also took part with Paddy winning Gold in the discus on Saturday 18th while the following day the 19th, he came second in the shot put and second in the hammer throw. His brother Willie won gold in the hammer throw. All three were representing Birr Athletic Club and all three will be competing in the National finals which take place on Saturday 2nd July and also on the week-end of the 9th and 10th July. We extend congratulations and well done to them and wish Tom, Paddy and Willie the very best of luck in the National Finals. 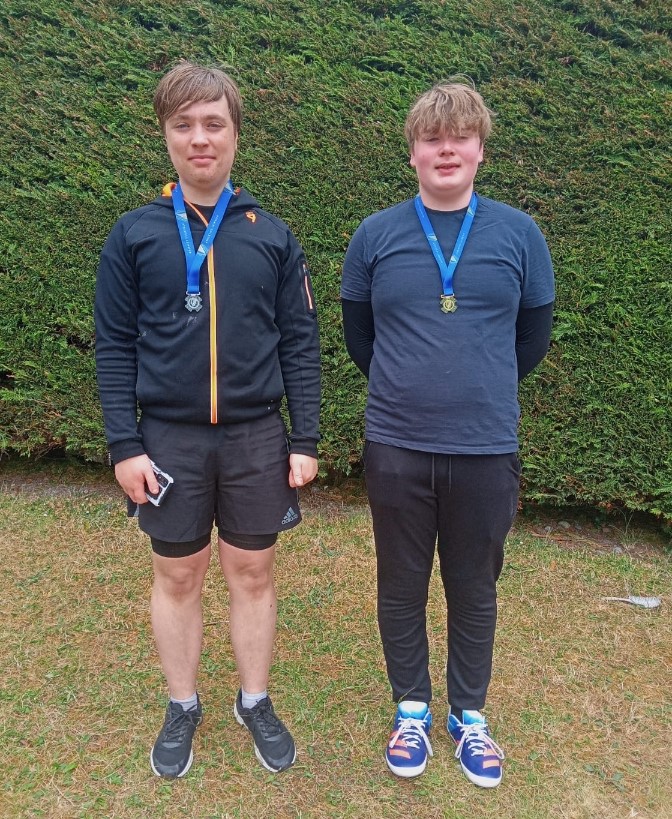 Well done to our U14 team who reached the U14 C Shield County final in The Ragg last Sunday. It was their second appearance in a week at the camogie grounds where they over came St Ritas Fethard, in the semi final in an impressive display winning 2-02 to 1-01. The final v Cashel was a tough battle but the Lorrha girls did themselves and their families proud with great teamwork and some superb prformances all over the field. Final score 4-03 to 0-7 to Cashel. They now have the U15 league to look forward to starting 11th July.
Our U12s also had a tough encounter v Burgess in Tony Reddin Park last week  with a level score at half time, however Burgess added a number of points to their tally in the second half to come through 5 -2 to 3-0 . Two more away game remain in our group stages before semi final stages.
Cul Camp will commence 11th July in Tony Reddin Park – all welcome.
Well done to Clodagh McIntyre and the Tipperary team in their dramtic win over Wexford and we wish her all the best in the final group match v Cork on July 2nd in Pairce Ui Rinn.
Congratulations to Emma Kennedy and Tipperary U14 A camogie team who won their Munster final in Carriganore, Waterford on the 19th of June. It was a busy few weeks for Emma who was named Junior Camogie Player of the year for Portumna Community School, a well deserved award.  Commisserations to Ella O’Meara and Tipperary U14C team who lost by 1 point v Cork in their Munster final in Waterford and well done to Sophie Houlihan who put in a superb defensive performance for Tipperary v Kilkenny in a recent challenge match.
A big thank you to all those who attended and those who bought tickets in support of our recent Medal Presentation night Dinner Dance in Dooleys Hotel . A great spread and service was given by Dooleys on the night. Thanks also to The Pitt Fitness- Conor Sullivan, Portumna Balloons – Orla Kennedy and Louise Mannion for their generous sponsorship and to Ken Hogan and Aiden McIntyre for conducting an entertaining presentation. A great night was had by all in attendance with no free space left on the dance floor!
Our Lorrha Camogie History Wall was also lanched with photograhs on show from 1968 of the U 16 Lorrha County final winning team( from Agnes Brophy) and from the County final win in 1985, (from Bernie Cleary )and also featuring Agnes Brophy. More to follow on our Histoy Wall and if you have any photos from the achieves we would be grateful for a copy to display, please contact Pauline Hoctor on 087 9280673 and Caroline O Brien on 087 2345817.

RTÉ2’s hit show First Dates Ireland is currently taking applications from single people who would like to experience a match making process. The requirements to apply are simple. You must be over 18 years of age and of course be single. The show is open to all genders and sexualities and if you are interested in taking part go to www.cococontent.ie/firstdates.

Church Bookings:  Can anyone wishing to book anniversary masses, christenings, weddings etc, please contact the church sacristans, Agnes Slevin in Lorrha, and Mary Cleary in Rathcabbin. Thank you.
First Friday Mass on Friday next 1st July will be celebrated in Rathcabbin Church at 8pm.

On Saturday June 18th 160 people gathered from across the Irish Church in Athlone. The themes emerging from the Synodal Process are the same right across the country.
“While each diocese had its own particular experience of the Synodal Pathway, nevertheless what we heard on the day  were many common themes emerging across the country – North and South – such as: The continuing importance of faith in people’s lives. Reflections on our sense of belonging to church; Expressions of how abuse is part of the story of the Church. A call for much greater roles of women at all levels in the future of Church. Attention to sexuality, relationships and LGBTQI+ concerns. The importance of education, catechesis, youth, family and co-responsible leadership. Lay ministry, culture and the impact of Covid-19; as well as to faith formation, clergy and liturgy. 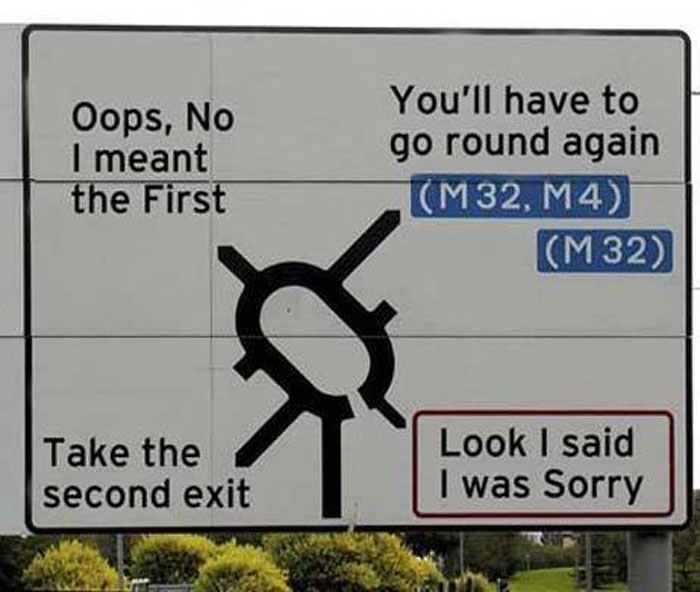