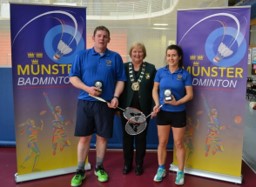 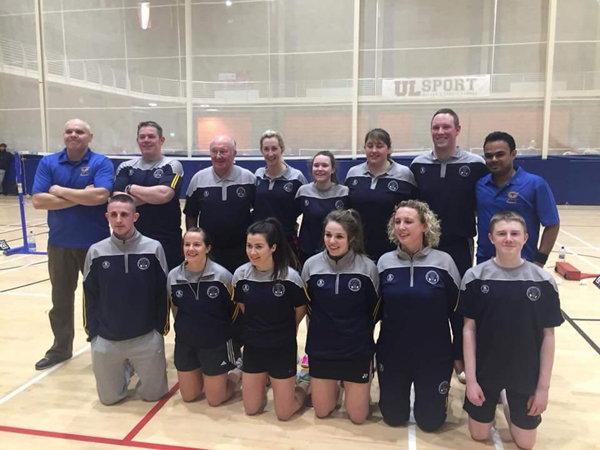 The Tipperary Badminton Grade G team who are current Munster Badminton Champions and will be playing in the All Ireland finals on Saturday in the National Indoor Arena in Blanchadstown commencing at 12.30pm. They will play the  Connacht champions Galway and Westmeath who are Leinster champions. The best of luck to  the Rathcabbin’s Trevor Hogan and Elaine (Hough) Hogan and the team. Back Row – Miklos Heveli, Trevor Hogan, Joe Touty (Selector), Michelle Hassett, Allie Harding, Maureen Dunphy, Ciaran Hassett, Bibin Joseph.  Front: Stephen O’Riordan, Grainne O’Brien, Elaine (Hough) Hogan, Sinead Costello, Brid Carroll (Selector), Paul Ryan. Good luck to all. 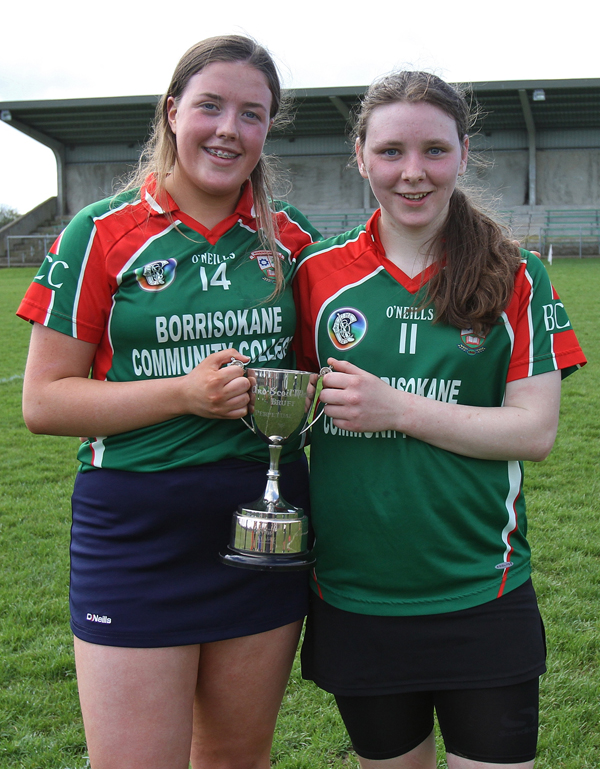 Well done to Celine Cleary Rathcabbin who captained Borrisokane Community College to victory over Scariff CC in the Senior Camogie Munster Final last week. Celine on left, is pictured here with player of the match Laura Shinners who scored a grand total of 5.2. Well done girls and the team. 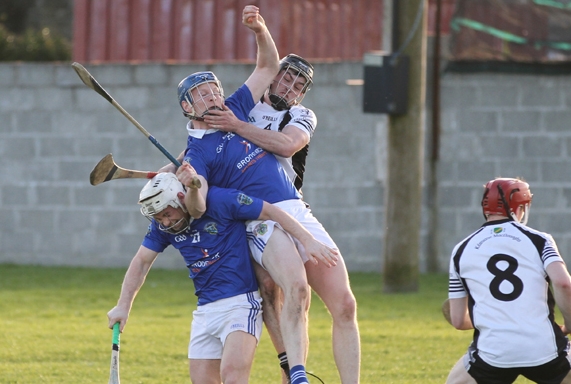 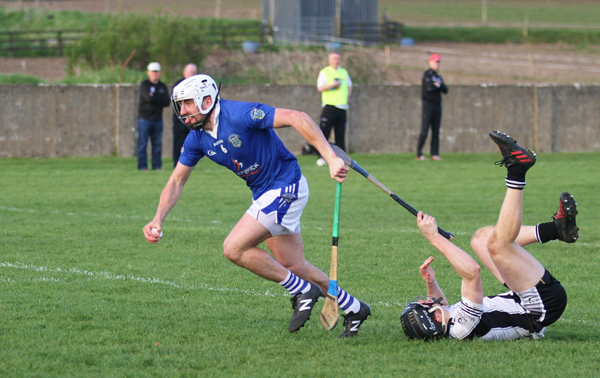 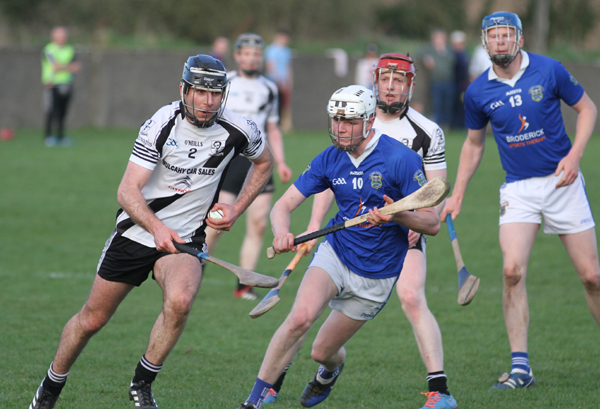 We are delighted to announce that we have been awarded the 5th Green Flag which is for Biodiversity. Our thanks to everyone who helped in whatever way and a special word of thanks to Leslie Harding who ‘built’ a very sturdy bug hotel and the pupils for helping him to place on site and ‘furnish’ it out leaving it ready for its new occupents!.

Fr. Ger Nash, Diocesan Secretary has asked us to let you know about the Family Picnic Day which takes place next month.

“The World Meeting of Families takes place in Ireland this year, the highlight being the visit of Pope Francis in August. Here in the Diocese of Killaloe there will a Family Picnic Day on Sunday, May 6th as part of our celebrations. The venue will be the Showgrounds in Ennis and it will run from 2.00 pm to 5.00 pm.  This will be a free event with lots of things for children to do and lots of music and entertainment for all ages.  Bring your own picnic and there will be prizes for the best. No BBQ’S allowed.”

Congratulations to our pupils who participated in the school’s athletics in Nenagh last week in such a sporting manner. Emma Kennedy came 1st in the Long jump and 1st in the 60m event. Her brother Conor came 2nd in the 60m, while Ava Young came 3rd in the 500m event. Our relay team of Niall Duggan, Ava Young, Emma Kennedy and Conor Kennedy also came first to claim gold. Well done to all.

The death took place on Sunday April 15th  in Tullamore General hospital of Mick Carroll, Derry, Rathcabbin. Mick who was 89 years old, farmed all his life while his sister Nancy looked after the local Post Office for many a long year. He was a familiar figure on the roads on the way to a match and those travelling to the same event didn’t want to get caught behind Mick or they might be very late for the game. Mick travelled all over the area for his favourite hoppy, playing cards and meeting with friends. He is survived by his sister Nancy, cousins, relatives and friends to who sympathy is offered.
After funeral Mass in Our Lady Queen of Ireland Church, Rathcabbin on Wednesday April 18th. burial took place in Pallas Cemetary, Rathcabbin. May he rest in peace.

Sympathy is also extended to Maureen O’Meara and family Rathcabbin on the death of her father and Margaret Gleeson and family on the death of her brother, Sean Mcloughney, Ardcroney which occurred on Wednesday 18th April. Predeceased by his beloved wife Mary B. Deeply regretted by his cherished family Eamonn, Maureen and Patrick. Grandchildren Cathal, Anna, Michael and Isobelle. Sisters Alice, Maureen, Margaret, Pauline and Geraldine. Son-in-law Declan, daughter-in-law Helen. Brothers-in-law, sister-in-law, nephews and nieces relatives neighbours and many friends. After funeral Mass on Friday 20th  burial took place in Ardcroney New Cemetery. May he rest in peace.

The best of luck to Elaine (Hough) Hogan and Trevor Hogan and their team mates in the Tipperary Badminton team in the All Ireland Badminton final in the ‘G’ grade on Saturday coming the 28th. The Tipperary team who are representing Munster play the Connacht champions Galway and Westmeath who are Leinster champions. It all takes place in the National Indoor Arena in Blanchadstown commencing at 12.30pm We wish Elaine and Trevor well as they try to take the title of All Ireland Champions for the first time in this grade.

Well done to our Junior team winning last Sunday against Silvermines on a scoreline of 3-14 to 2-9, many thanks to all those who came along to support the team. We are out again next weekend against Burgess, further details of this match later in the week, please check our facebook page.Training for all Juniors in Moatfield this Friday at 8pm.

Banagher will come alive when this year’s Offaly Fleadh Cheoil will take place in the town from April 27th to the 29th.   The event will be hosted by West Offaly Comhaltas. A huge line up of artists at various age levels will be participating. Not a week- end to be missed.

Senior: A poor start saw Lorrha fall to a 3-22 to 2-14 defeat to Kilruane MacDonaghs in the North Senior Hurling Championship in Borrisokane on Saturday. Speedy recovery to Jack Maher who sustained a serious hand injury in the game. Lorrha’s next championship game won’t be until Tipperary’s championship campaign is an and end. They return to league action on the weekend of 19-20 May against Burgess.

Junior Hurling: The North Junior ‘B’ League game against Ballinahinch has been rescheduled for Friday 27th April in Shallee at 6.30pm

Under 21: Lorrha will be away to Shannon Rovers Gaels in the opening round of the North Under 21 ‘B’ Hurling Championship on the weekend of 5-7 May.

Under 16: Lorrha Rovers Gaels were in action twice last week in games rearranged from the snow. Firstly, they lost 4-8 to 2-4 to Ballina in Moatfield, before falling 1-12 to 2-6 to Ballinahinch/Templederry on Saturday. Those results put them into a quarter final against Kilruane MacDonaghs which will be played this Thursday 26th April in Cloughjordan at 7.00pm with the winners progressing to the semi-finals next Monday.

Under 14: Lorrha’s next game in the ‘B’ football championship is on this evening, Wednesday 25th April, away to Borris-Ileigh at 7.00pm. On Saturday, 28th April, they play Newport in Moatfield at 3.00pm

Under 12: Lorrha will play Kiladangan in the North ‘B’ Football semi-final on Friday 27th April in Moatfield at 7.00pm

Healthy Club: Lorrha & Dorrha GAA Healthy Club Project will host a Mental Health Awareness Evening & introduction to the Health Clubs Project in the GAA Centre, Moatfield on Tuesday 8th May at 8.00pm. Present will be John McElhinney of Mental Health Ireland talking about general Mental Health, and also former Tipperary senior hurler John Leahy who is an Addiction Counsellor on the topic of Substance Abuse. This is a free event for everyone from 12 years or older. Refreshments will be served after. All are welcome.

Third Level: Congratulations to Brian Hogan who was selected on the Third Level All Stars hurling team for his performances with Maynooth University this year.

Lotto & Tipperary Draw Package: The new Tipperary Clubs Draw starts on Friday 11th May. Last year, the club had 153 subscribers and we are looking to increase that figure with half the ticket sales staying with the club. We are also have a special package where those who join the Tipp Draw and the Lorrha GAA lotto for one year, can do so for €180 (52 lotto draws for the price of 40). Club members will be promoting both draws in the coming weeks and we ask for your support.

Social Dancing: in the GAA Centre on Friday night to the music of Pat Daly. Dancing 9.30pm to 12.30am.

Sympathy: Lorrha GAA Club would like to sympathise with the McLoughney, O’Meara and Gleeson families on Sean McLoughney, Ardcroney, who passed away last week. May he rest in peace.