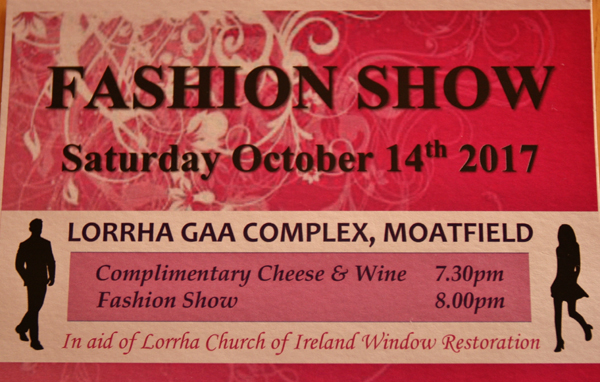 Bernadette Dunne from TASK will be giving a talk and answering questions in St. Ruadhan’s Community Hall on Wednesday afternoon, 11th October 2017, at 3pm.  TASK Community Care Service looks after the security of the elderly and gives peace of mind to all older people including those living alone.  All interested in the safely and wellbeing of their loved ones are invited to attend.

Due to unforeseen circumstances, Rathcabbin Players annual general meeting had to be changed to this Wednesday night October 11th at 8.30pm in Rathcabbin Hall. We apologise for any inconvenience this may have caused and we look forward to meeting all members and new members too.

A short film on the re-enactment of MacEgan Curse will be shown on Friday night October 20th in Lorrha Community Hall at 8.30pm. Admission is €5 for adults and €2 children with all profit going to Lorrha Community Responder group. The last screening will be held on Saturday night October 28th at 9.00pm in Rathcabbin Hall. Admission is €5 and children €2 and all profit from this night will go to Rathcabbin Community Responder group. There will also be a C.D. recording of film on sale on both nights priced at €10.

James Kilbane in fundraising concert in Rathcabbin Church on Saturday 18th November. Tickets now on sale. Please note that during the month of October we will pray the  Rosary before Mass  in the three Churches.

Social Dancing Classes will commence in Portumna hall on Thursday 12th October from 8.30 to 10.30pm.  Admission €10.

We are looking for school age bikes/scooters/tractors for cycling that are still in good condition and families are finished with. If you would like to donate or sell any items to the school, please call us on 090 9747186. We are also looking to build up our LEGO resources, if any families have any unwanted LEGO, we will gladly accept.

St. Cronan’s Service Birr has a CE vacancy for a Housekeeper.  A full clean B driving licence will be required for this position. In order to be eligible for these positions you must be in receipt of a Social Welfare payment. If you are interested please phone Deirdre on 0879772409 /0505 21426 for further information re these position.

Through a series of practical projects on site and a work placement with an employer, learners will develop the necessary skills to assist them in gaining employment in this industry.

Lightnet Broadband Expand Across the Shannon!

Lightnet a broadband company based in Loughrea Co. Galway, is delighted to announce the expansion of their broadband network across the Shannon to North Tipperary.  The main coverage areas are: Lorrha, Carrigahorig, Terryglass, Aglish, Ballingarry Borrisokane and Rathcabbin.

Through rapid growth, they are expanding their coverage areas in a major network investment, this has allowed hundreds of homes and businesses which previously had limited options for broadband to avail of their service. Lightnet have an excellent track record in reaching places other providers can’t, they have achieved this through significant capital investment in technology infrastructure.

Lightnet have limited & unlimited data packages, with no extra charges for excess data so you don’t need to worry about your bill going up each month. They are also a registered reseller of Open Eir providing high quality Fibre Broadband all over the country. Whether you use the internet for Netflix, for the kids’ school work, for your business or working from home they have packages to meet your needs. Full details of Lightnet packages and coverage areas are available on www.lightnet.ie or call their office in Loughrea on 091-395804.

Lightnet are a company based in Loughrea, providing high quality, affordable broadband connection to homes and businesses. Set up in 2006 by local man Enda Broderick to meet a demand for a broadband service in Galway, Clare and the country. The company has grown steadily keeping up with customer demand.

Junior: The North Tipp Junior ‘B’ Hurling Championship Final against Newport wasn’t fixed at the time of going to press.

Under 21: Lorrha were defeated 1-18 to 0-14 by Silvermines in the opening round of the North ‘B’ Hurling Championship in Puckane on Sunday. Lorrha’s next game is against Shannon Rovers Gaels on Saturday 14th October at 3.00pm

Under 13: The U13 hurlers progressed to the North ‘B’ Hurling Plate final following a1-7 to 0-9 win over Moneygall in Moatfield on Saturday. Lorrha will play Ballinahinch/Templederry in the final, whom they drew with in the group stages. The game will be played this Sunday 15th October at 2.00pm with venue to be confirmed. Best of luck to the players and mentors.

Tipperary Clubs Draw: Congratulations to Rory Coen, Lorrha who won top prize of a Renault Megane or €15,000 in the October Draw held last Friday. It is the first time in over 20 years the club has won the top prize. Congrats also to his father Tony who scoops the promoters prize of €500, his third promoters prize this year.

Fundraiser: The clubs 2500-to-1 fundraising draw with a prize fund of €10,000 has been put back to Saturday 21st October to get the final tickets sold. Thanks to all those who have entered the draw so far. We have 2,500 tickets valued from 1 cent to 2500 cents (€25) and when you accept to take a ticket, you scratch off a hidden section and the value in this section is what you pay for the ticket, it could be 1 cent, €25, or any value in between. All tickets bought will be entered into a draw for a top prize of €5,000 with eleven other prizes ranging from €2,000 to €200. Your support would be appreciated.

Social Dancing: continues on Friday with music of Dermot Lyons, from 9.30pm til late.

Books and music formed the backdrop to the UL Honorary Conferrings today (10/10/17) as historian and author George Cunningham and Irish Chamber Orchestra (ICO) Chairman Michael Buckley were conferred Honorary Doctorates of Letters at University of Limerick.
UL President, Dr Des Fitzgerald said: “The bestowing of a UL honorary doctorate represents the opportunity to honour those who have inspired, and worked tirelessly to make great contributions in their fields of endeavour. Today, we honour two such men who have made unique and powerful contributions to history and the arts in this country.”

“George Cunningham has spent his life preserving and creating books, he fosters a love for literature in everyone around him. His contribution to preserving local history in Tipperary and Clare is immeasurable. Michael Buckley has deployed the experience of a distinguished career in public and private sectors to benefit a range of national initiatives in particular the development of the ICO with its vision of artistic excellence coupled with social transformation.”

In addition to publishing more than 100 books and articles, George Cunningham has collected over 25,000 volumes but has given away more than three times that to schools and other institutions. Recipients of his books include Coláiste Phobal Ros Cré, the Tipperary, Offaly and Laois library services and University of Limerick’s Glucksman Library.

Born in Roscrea in 1940, George Cunningham was awarded a secondary scholarship to St Flannan’s College in Ennis, County Clare. George then went on to graduate from St Patrick’s College, Drumcondra as a primary school teacher in 1961.

George played a major role in the establishment of the annual Burren Spring Conference in 1991. Two years later, he contributed to the founding of the Burren College of Art in Ballyvaughan.

George went on to successfully lead a campaign for the preservation of Damer House, a Queen Anne townhouse built within Roscrea Castle in 1720, before opening it to the public as a national monument. Following this, George spearheaded many restoration projects including the Damer House Annex and Roscrea’s round tower.

George retired from teaching in 1987, and in the same year he founded the Roscrea medieval conferences, which brought together national and international scholars to present on learned aspects of Early Christian Ireland and the later Middle Ages.

George served on the UL Governing Authority from 1992 to 2009 and fulfilled the role of deputy chairperson from 2003 to 2007. As chair of the Library Development Committee and a member of the Library Building Committee, his campaign to champion the library’s expansion culminated in the opening of the 9,170 square-metre Glucksman Library in 1998. George was responsible for the acquisition of the antiquarian libraries of Eamonn Norton, Fr John Leonard and Ciarán McAnally and was influential in securing the personal papers of the writer Maurice Walsh and the Armstrong Family of Moyaliffe Castle, County Tipperary. George was also a member of the initial design team for the redevelopment of the Glucksman Library – an inspiring, 15,000 square-metre facility due to open in early 2018.

The Irish Chamber Orchestra at the University of Limerick has gone from strength to strength under Michael Buckley’s stewardship since he joined the board in 2005.

Born in Cork in 1945, Michael Buckley obtained a first-class honours degree in philosophy and political theory from Maynooth University and later went on to complete a Master of Arts and a Licenciate in Philosophy. His employment at the Department of Finance as a civil servant in 1967 marked the beginning of a long and distinguished career. Over the course of the next ten years, Michael combined his civil service work with teaching political theory to evening-degree students in UCD.

In 1977, Michael was selected as chef de cabinet for the president of the newly created European Court of Auditors. He spent the next four years in Luxembourg, where he played an important role in establishing the ECA, now a key institution within the European Union. On returning home in 1981, he took up the role of assistant secretary at the Department of Social Welfare.

Michael became involved in creating and developing the International Financial Services Centre, which was established in 1987.  Michael then joined AIB, where he played a leading role in internationalising the bank until his retirement in 2005.

Michael then spent nine years with the Dublin-based energy and distribution group DCC, including six years as CEO.

Michael was also founding chair of the 30% Club Ireland, an organisation committed to achieving 30% female representation among senior management in leading Irish businesses.

With Michaels leadership, the ICO has raised €1.2 million over the past eight years to fund the socially transformative Sing Out with Strings programme with Reaching out to the most disadvantaged schools in Limerick city since 2008, this community engagement initiative provides more than 300 students with free tuition in singing, song-writing, violin, viola, cello and double bass three times a week. Michael’s passion for the programme is evidenced by the fact that he has attended almost every one of its concerts.