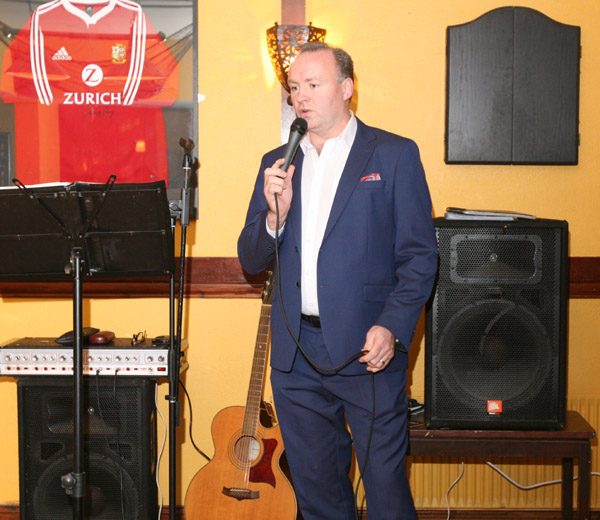 Tipperary Senior Selector John Madden was the special guest who launched the 2017 Lorrha & Dorrha Parish Calendar. We wish John and the team the best of luck next season. 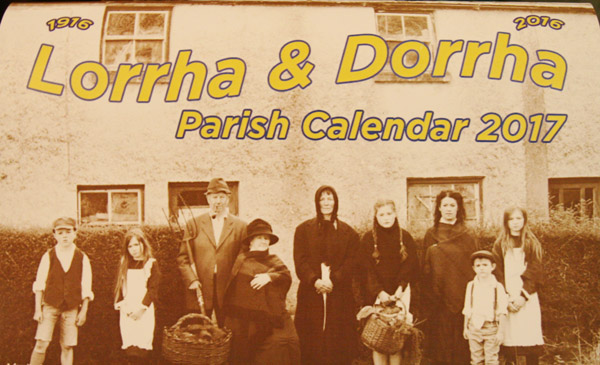 The launch of the 2017 Lorrha & Dorrha parish calendar took place on Saturday night last in the Friars Tavern. Our thanks to Mark and Donna  for the lovely meal beforehand and to all who attended.  Special thanks to Tipperary selector John Madden who launched the calendar. John, Patrick ‘Boner’ Maher and Brian Hogan, our parish representatives on the Tipperary All-Ireland winning team, feature in the calendar when they visited the parish with the Munster and Liam McCarthy cups. John was very complimentary about the village and the calendar and our thanks to him for his kind remarks. A special mention to all our advertisers who place adverts in the calendar as without them it would be harder to produce. Please support their business. As usual, the calendar is packed with photographs from the past and the present and is a lovely Christmas present as well as a treasured keepsake to have. A full list of stockiest will appear next week.

Lorrha Development / Tidy Towns committee will hold their Annual Christmas Market and Auction on Sunday 4th December commencing at 1pm. Tables are available for anyone wishing to sell / promote their produce. Call Mary (090) 9747196 or Liz (090) 9747893 (leave message). Also, anyone wishing to donate items for the auction please call Louis (086) 8493595. Members of the committee will be out and about selling €2 lines for the draw which takes place on the day of the market so please support them when they call to you. Remember, when you support Lorrha Development/Tidy Towns, you are helping to keep two people employed in the village. Many thanks to everyone who has supported us in the past.

Pupils and staff in Lorrha N.S. have commenced collecting used batteries for the Laura Lynn Children’s Hospice. This is open to the public, so if anyone is interested in disposing of their old batteries, you can drop them into the school any day between 9am and 3pm. Boxes for used batteries are available in the school also. You can also make a difference to the environment and at the same time, help raise funds for the Laura Lynn, Ireland’s Children’s Hospice by gathering up all waste batteries in your home. Every moment matters, every battery helps.

Mass on Wednesday, 9th November in Lorrha Church at 7.30p.m. This Mass will be offered for the Holy Souls. This coming Friday (11th November) we will have our annual Mass of Remembrance  at  7.30p.m. in  Rathcabbin Church  for all who have died in our community. The names of those who have  died in the past  year will be read aloud, and a member of the family or a friend will be invited to bring a lighted candle to the sanctuary. You can remember to pray for members of your family by lighting a candle and offering a prayer for your loved ones who have gone to God.

Michael O’Connor will escort a tour to Benevento and San Giovanni from 18th April 2017. Many will remember Michael who attended a healing Mass in Clonfert last May with a Padre Pio relic. One night full board in Benevento, 3 nights full board in San Giovanni Rotondo. Itinerary to include a visit the birth place of Saint Padre Pio and the church where he celebrated his first Mass. The cell where he lived and died, and his tomb. Direct flight from Dublin to Naples. For more information contact Michael on (087) 2677656.

Sympathy is extended to Evan Harding and his children, formerly Rathcabbin, on the death of his wife Olive, and to Marie and Gilbert, their daughter in-law. After funeral Mass in St. Mary’s Church Maynooth on Monday last 7th burial took place in Laraghbryan Cemetery. May she rest in peace.

Our Open Evening will be held on the earlier date of Tuesday, 15th November at 7p.m. This is a great opportunity to visit the school, meet with the teachers, view the resources in the school and see the variety of activities carried out during the school year. Enrolment forms are available from the school now or can be downloaded from our website www.redwoodns.ie. If any parents would like to arrange a private viewing of the school and to meet the teachers please contact the school on 090 9747186 to arrange an appointment.

The ever popular annual Christmas variety show performed by the children of Redwood NS will take place on Thursday, 01st December at 7pm in the new location of Lorrha Community Hall. The show will incorporate music, song, Irish dancing choreographed by dance teacher Stephanie Power and ‘Night of the Museum’ produced and directed by Drama teacher Jared Madden. Admission is free, Raffle and refreshments on the night with hampers and great spot prizes to be won. A great night’s entertainment promised! Arrive early to guarantee your seat!!!

Congratulations is extended to Patrick ‘Boner’ Maher who won his second All-Star on Friday night last at the All –Star awards ceremony, for his terrific year of hurling with the Tipperary senior team. Well done Bonner.

HE Mr Richard Andrews, Australian Ambassador to Ireland, will launch ‘Lorrha People in the Great War’, a new book by Lorrha native Gerard O’Meara.  Many sportsmen get a mention including a accomplished polo player Charles Head of Derrylahan.  An unexpected discovery during Ger’s research was how people with Lorrha connections deatured so prominently in the sport of motor racing.  Charles Head’s grandson, Patrick Head is the well known Engineering Director of the Williams Formula One Racing Team. Another car racer was Sir Henry O’Neil de Hane ‘Harry’ Segrave of Bellisle.  Harry Segrave broke the world land speed record on three occasions.  He went on to break the world speed boat record. The launch will take place on Saturday night 19th at 8.30pm in the GAA clubhouse. All are invited to attend.

When cleaning out your wardrobe to make room for the winter collection, please remember Lorrha Development/Tidy Towns who continue to collect unwanted clothes throughout the year. Items of clothing must be clean and dry and in good condition please and we can supply bags if you want. We can also collect to make it easy for you, just call (086) 8647166, (086) 8493595 or (087) 2601413 with your name and details. Please note we cannot accept Duvets, bedding, household linen, pillows, cushions, carpets, rugs and maths including bath toilet and shower math’s, soiled or wet clothing. All money raised from all fundraising ventures is used for the ongoing work around Lorrha Village which helps to keep two adults employed. Many thanks for your continued support.

Under 21: Lorrha suffered a 1-17 to 1-12 defeat to Burgess in the North Under 21 ‘B’ Hurling Championship semi-final in Puckane on Sunday. Going into the game with high hopes, a slow start to the second half ultimately cost us despite a late rally. Thanks to the players and mentors for their efforts over the past couple of months.

All Star: Congratulations to Patrick ‘Bonner’ Maher who was named at wing forward on the 2016 GAA Hurling All Star team. This is Bonners’ second All Star having won it previously in 2014.

Wall Ball: Session for 10, 11 and 12 year olds with David Needham on Saturday 12th November in Moatfield at 3.30pm. This will be a monthly session through to February.

Thank you: The management of the Lorrha/Shannon Rovers Gaels under 14’s would like to thank the parents and players for supporting the recent fundraiser. 1St – James Ryan, 2nd – Sean O’Meara (Cullagh), 3rd – Saoirse Guinan.

Scor na nOg: The North Finals of Scor na nOg take place on Friday 18th November in Birdhill. Anyone interested in taking part in any of the competitions can contact Shane Brophy, 0876989612.

Tipperary Clubs Draw: The club had no winner in the November draw which took place last Friday night. Thank you for your continued support.

Social Dancing: on Friday night to the music of Peter Burke. Dancing 9.30pm to 12.30am.