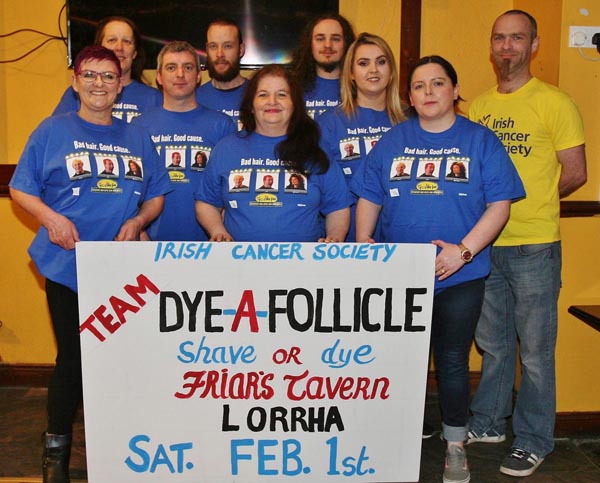 Weather permitting the North Tipperary ploughing championships will go ahead on Saturday next 14th at 12 noon in Borrisokane on the lands of Donie O’Meara by kind permission. Membership is due and must be submitted on or before March 20th. By now, all members should have their allocation of raffle tickets to sell. Tickets cost €5 with first prize €300, 2nd. = €200, 3rd = €100, 4th = Two tickets to the National Ploughing championships in September and numerous other prizes. The draw will take place on Saturday 28th March in O’Meara’s Restaurant & Bar in Portumna. All members are asked to sell their allocation of tickets please.

Sympathy is extended to Agnes Slevin and family, Lorrha on the death of her sister Kathleen McDonald, Mountrath which occurred on Tuesday March 3rd.
After funeral Mass in St. Fintan’s Church, Mountrath on Thursday 5th burial took place in St. Fintan’s cemetery. May she rest in peace.
Sympathy is also extended to John Kelly and family Lorrha on the death of his father Joseph (Joey) who passed away peacefully at his son John’s home at Rath, Lorrha on Thursday March 5th.  Dearly loved husband of the late Julia Ann and much loved and loving father of Theresa, John and the late Christopher. He will be sadly missed by his loving family, grandchildren Dean, Jason and Caoimhe, great-grandchildren Luke and Pippa, son-in-law Benny, John’s partner Lorraine, brothers, sisters, extended family and friends. After funeral Mass on Saturday last in St. Patrick’s Church Wicklow, burial took place in Rathnew Cemetery.  May he rest in peace.
Sympathy is extended to Mary Walsh and family Lorrha on the death of her sister in England last week. Funeral arrangements for Ireland to be announced later.
Church News.

Congratulations to the children of the Parish who will receive their Confirmation on Sunday last in Lorrha Church. May they be filled with the Holy Spirit.

Imagining the Church of the Future.

Bishop Fintan has initiated a diocese-wide process of reflection & planning. The aim is to help parishes& pastoral areas to think about & plan for the future. The first part of this process, ‘Let’s Imagine’, will take place from March to May 2020. People who are thinking & writing about the future of the Irish Church will offer presentations at venues across the Diocese. Fr Michael Conway, from Maynooth College, will speak on The Church of the Future in the Barack Obama Plaza on Thursday March 12th at 7.30 pm. Everyone who is interested is welcome to attend.

Lorrha Camogie extend congratulations to Clodagh McIntyre on winning the Purcell Cup with UCD on the 16th of February. There was also club rivalry in the Purcell cup quarter final where Clodagh was on the opposite team to her own teammate Celine Cleary who was representing LIT.
Our first Junior B league match v Portroe was postponed due to the bad weather and our next match is down for 21st March at home v Annacarty. Time to be confirmed.

Progressive 25 Cards – Winners on 10 games John & Frank and Mick & Sakie. Cards continue every Friday night at 8.30pm. in the hall.

St. Kieran’s Care Home, Rathcabbin regret to announce that the planned coffee morning combined with a Daffodil day which was to take place on Friday 27th March has had to be cancelled due to the Corona Virus.

Would you like a Social Outlet?  Freshly Cooked Meals, Outings, Activities Eg: Music,Song/Dance,Bingo,Cards,Quiz etc. or just Sit Back Relax, Read and interact with other attendees. Bus Service available: From Your Door to the Centre on the following days.
Tuesday: Tynagh,Abbey,Duniry.  Wednesday:Woodford. Thursday:Lorrha/Rathcabbin
Tuesday/Wednesday/Thursday-Local Collections.
If you are interested please Drop in for Meet and Greet or Tel:090-9741740 for more information.

Senior: The senior hurlers lost by four points, on a scoreline of 4-15 to 2-17 to Kiladangan last Sunday in their first round of the County League. Up next is Thurles Sarsfields at home next weekend. Fixture TBC.

Junior Hurling: Well done to the Lorrha juniors who defeated Ballingarry by 3-13 to 2-7 in the County League first round today. Fair play lads. Juniors have a bye next weekend.

U14 Football: The Lorrha Under-14s will host Templederry/Ballinahinch next Saturday at 2.00 with a place in Féile Peil ‘B’ semi-final up for grabs.

Schools hurling: Well done James Guinan and Birr lads who won All-Ireland schools ‘B’ semi-final against Ballycastle at the weekend. Best of luck in the final.

Coaching course: The club will be providing a foundation level coaching course in Lorrha on Mondays March 23 and March 30, with David Needham providing the class. Both of those dates are booked out, but if there is any more interest, we’ll run another one.

Child welfare course and Garda vetting: There will be a child welfare course in the clubhouse on Wednesday March 11.Registration at 6.10. The course begins at 6.30. This course is essential for anyone who wishes to be involved with any of the underage teams this year. Garda Vetting is also essential for any underage coach, and they can cover this by looking up GAA Garda Vetting and following instructions.

Euro Lotto: Lorrha have entered the Euro Millions for 2020/2021 as part of our major fundraiser for the coming year. Tickets are great value at €20, with each entrant a part of the club’s syndicate which will be entered in a number of draws per week. All support appreciated.

Membership: All players are to have their membership paid. Membership can be paid on clubforce.com, with all rates unchanged from last year.

Summer coaching: Tipperary GAA coaching and Development are recruiting coaches for this year’s Easter and Summer GAA camps. Coaches must be born 2003 or earlier. If you are interested, apply via email to Dinny Maher:  tipperarygaacamps2020@gmail.com.

Sympathies: The club would like to extends its sympathies to the Fallon family, Derry, Rathcabban, on the death of John. John played corner back for the senior team in 1958, and was part of the Junior hurlers’ North final winning team in 1966. John was a tenacious and committed defender. May he rest in peace.