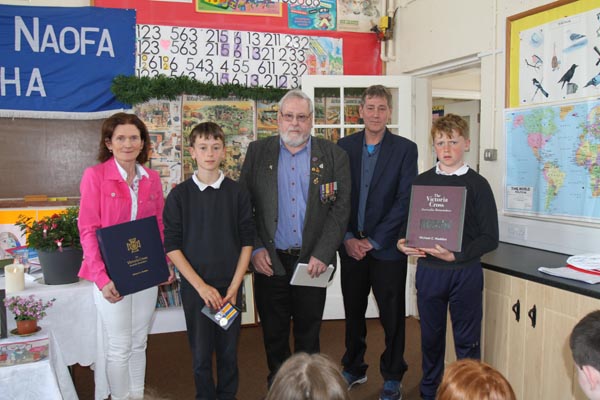 John Madden is the father of Australian author Michael Madden who has written a book about Australian VC recipients during the war.  The book includes information about Lorrha VC recipient Martin O’Meara whose medal is now on view in the National Museum of Ireland for one year. The medal will be making a trip to Lorrha next year before it is returned to Australia.  John and his son Anthony who were in Ireland recently, are pictured here making a presentation of a copy of the book to Lorrha school Principal Mrs. Olive O’Meara with pupile Conor Kennedy and Kian Claffey.  They also made a presentation to the school of a set of Martin’s replica VC and war medals.    Photo:   Rose Mannion. 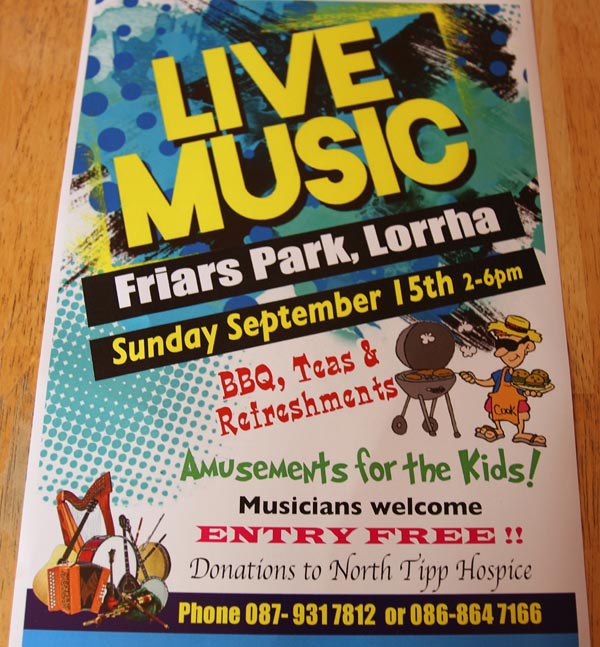 A music event with singing and dancing, will take place on Sunday September 15th in Friars Park, Lorrha with donations going to North Tipp Hospice.  If you can sing, play a musical instrument, tell a story or recite a poem and can spare just a little time, please come along. Many have already answered the call and will perform of the day, but there’s plenty of room for more anytime between  2 and 6pm. If you are free and prepared to give some time of your talents, or for further information please call (087) 931 7812 or (086) 864 7166.  It’s for a very good cause.

Lorrha Development/Tidy Towns extend sympathy to the family of Noel Houlihan on his death last week. Noel was a great supporter to the group and he understood and appreciated the amount of work that was undertaken each year. He will be sadly missed by all but in particular his family. May he gentle soul rest in peace.

The death occurred of Frank Madden (91) in Preston England on Wednesday 17th July 2019. Having lost his wife of 66 years, Teresa (nee Dowd) in February of this year, Frank passed away peacefully surrounded by his family.
Originally from Portland, Lorrha, Frank moved to England in 1952 with Teresa, where they set up a beautiful & loving home for their family. Frank was honest and hardworking, kind and caring, a true gentleman, who loved spending time with his family, visiting home here in Ireland and amongst many other things, gardening for which he won many awards.
Frank is very sadly missed by his heartbroken children, Ellen Patricia, Kathleen, Martin and John, his beloved grand children and great grandchildren, brothers John and Noel (Portland), Joe (Ballinasloe), his sister Chrissie (Conway, Ballycrissane), sons-in-law,, daughters-in-law, nieces, nephews relatives and friends to whom sympathy is offered.
Franks funeral Mass was held in Preston followed by burial afterwards on Monday 29th July.  May his gentle kind soul rest in peace.

The death occurred of Noel Houlihan, Lorrha and Carrig, Birr on Tuesday 27th August.
Predeceased by his father Tom and brother Christopher he is  survived by his  wife Ita, sons Keith and Stephen, daughter Catrina, mother Kathleen, brothers Thomas and Bernard, sisters-in-law Mary Catherine and Imelda, uncle, aunt, nieces, nephews, cousins, mother in law Kathleen Kennedy, relatives, neighbors and friends to whom sympathy is extended. After funeral Mass in the Church of the Annunciation, Carrig on Saturday last, burial took place in the adjoining cemetery. May he rest in peace.

Please Note that all details of Mass times, dates and contact numbers are detailed on the parish web site www.lorrhadorrha.ie Vigil Mass in Redwood Church on Saturday September 7th at 6.30pm and in Rathcabbin  Church the following day at 11.30am.

First Friday Mass will be celebrated on Friday 06th September in Rathcabbin Church at 8p.m

Notices for the Church Newsletter:

Please ensure to have notices into the Parochial House, Lorrha by midday on Thursday of each week. You may email notices if you wish to lorrhaparishoffice@gmail.com

The Catholic Grandparents Association are holding their Annual National Grandparents Pilgrimage on September 8th 2019, to Knock Shrine  for 2.30pm. Everybody welcome to honor and thank Grandparents alive and dead for all they have done for us down through the ages. Chief Celebrant Bishop Kevin Doran, Bishop of Elphin.

The Lorrha parish golf outing was cancelled last Saturday. The organizers apologize for any inconvenience this may have caused anybody. It will be re-fixed for another date at a later stage. Watch this space. The committee wish to offer their sympathies to the Houlihan family on the death of Noel last week. May he rest in peace.

Senior Hurling: Lorrha were defeated 6-13 to 1-21 by Templederry in the second round of the O Riain Cup in Moneygall on Sunday. The concession of some sloppy goals was Lorrha’s undoing after a fine first half performance. All is not lost as Lorrha face Carrick Swans next Sunday 9thSeptember in Littleton at 3.00pm where a win, coupled with a Thurles Sarsfields loss to Templederry will see Lorrha into the quarter finals.

The North quarter final rematch v Templederry has been fixed for Sunday 15thSeptember in Dolla at 3.30pm.

Junior Football: Lorrha have progressed to the County Junior ‘B’ Football Championship quarter finals which will be played on 21-22 September.

Minor Hurling: The minor hurlers were due to take on Silvermines in the North ‘B’ Championship quarter final on Monday evening. However, Silvermines were unable to field with the North Board to make a decision this week.

Under 16: Lorrha Rovers Gaels will take on Borris-Ileigh in the North ‘B’ Hurling final won Sunday 8th September in Templederry at 12 noon. With the senior hurlers playing in Littleton at 3.00pm, we ask as many supporters as possible to attend this game on the way.

Under 13: The Under 13’s made it three wins from three in the ‘B’ Plate competition following a 4-8 to 3-6 win over Newport last Tuesday. They hosted Moneygall/Clonakenny in Moatfield on Friday and won 3-9 to 1-10. On Tuesday, they played Silvermines in Dolla while on Friday 6th September they play Roscrea in Moatfield at 6.45pm.

Under 11: The under 11’s were defeated 5-6 to 2-1 by Portroe last Thursday in the ‘C’ Plate. This Saturday morning at 10am they play Templederry in Moatfield.

Tipperary: Well done to Darragh Guinan who was with the Tipperary Under 15 hurlers who taok part in the Arrabawn Shield Tournament on Saturday. They were defeated by Wexford in the semi-final and defeated Offaly in the 3rd/4th place playoff

Social Dancing: in the GAA Centre on Friday, 6th September with Pat Daly. Dancing 9.30pm to 12.30am.

Sympathy: Lorrha GAA Club would like to sympathise with the Houlihan family on the death of Noel Houlihan, Fadden, Carrig who passed away suddenly last week. Noel won a North U14 medal with Lorrha in the 70’s and was a great Lorrha and Tipperary supporter.

The club also sympathise with the Cleary family, Portland, on the death of Catherine (Rena) Cleary, Behamore, Cloughjordan who passed away over the weekend. A minutes silence for both was held at the senior hurling match on Sunday. May they rest in peace.