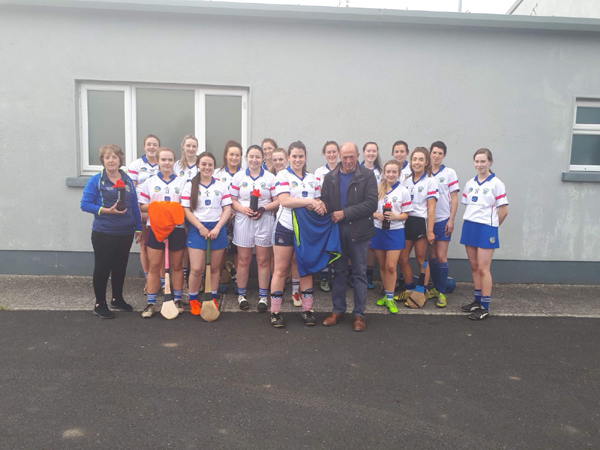 Joe Dolan Fencing Contractor, Rathcabbin, is pictured here presenting water bottles and bibs to Lorrha camogie girls ahead of their forthcoming championship campaign. The club wishes to thank Joe for his sponsorship. Lorrha play Knockshegowna in the first round of the Championship on August 12th. and we extend the best of luck to the team and management.

The death took place on Thursday 26th July of Nuala O’Sullivan, Ballyoughter, Rathcabbin. Formally Nuala Daly, she died suddenly  in her home in Ballyoughter which came as a great shock to her family, neighbours and friends.
A hairdresser in her younger days, Nuala loved meeting people and chatting to them and made many friends throughout her life. She was a familiar figure in Birr on a Friday doing her shopping and having a chat with her neighbours.
She will be sadly missed by her daughters Orla and Marina, son Brian, brother Seamus, sister Teresa, grandaughter Kelly, brothers-in-law Gerry and Simeon, nieces and nephews and wide circle of friends.
After funeral Mass in Our Lady Queen of Ireland Church, Rathcabbin on Sunday July 29th burial took place afterwards in Bonoham Cemetery. May she rest in peace.

The best of luck is extended to Clodagh McIntyre and the Tipperary Intermediate team when they play Kildare on Sunday August 5th at a Kildare venue in the last round of the championship.   Hard luck to Clodagh  and the Tipperary Minor team who were beaten by a very strong Cork side last week in a Munster semi-final on a score line of 4.11 to 0.11.

Free Kids & Parent Fun Tennis Event  Sunday August 12th (12-3pm).
Parents will be offered free coaching by a qualified coach on Friday 10th @7pm-9pm or  Saturday 11th @5pm-7pm to prepare to play in the fun competition on Aug 12th. To sign up please text 083-8704333.
This family sport initiative is funded by Galway Sports Partnership. Everyone welcome to sign up.

Senior: Lorrha will return to action in the Seamus O Riain Cup against Holycross/Ballycahill on the weekend of 11-12 August.

Minor: Lorrha Rovers Gaels minor hurlers sit top of the ‘A’ round-robin section after three rounds of games with their next game being against Borris-Ileigh in Nenagh on Thursday 2nd August at 7.00pm.

Under 16: Lorrha Rovers Gaels have two games to play against Kilruane MacDonaghs and Ballina in the group stages of the ‘A’ hurling championship. They have won one and lost one game so far. They play Ballina on Monday 13th August in Lorrha while the Kilruane MacDonaghs game has to be rearranged.

Under 14: Lorrha’s final group game in the ‘B’ hurling championship is against Burgess in Moatfield on Wednesday 8th August before the knockout stages take place. Lorrha have drawn one and lost two of their three games so far. They have also been playing in the Lough Derg Challenge, providing plenty of games during the summer.

Under 12: Congratlations to our under 12’s who reached a first ever North U12 final in the ‘A’ grade following a 1-5 to 0-3 semi-final win over Ballina in Moatfield last Friday evening. Not even a delayed start could deter the players from winning their sixth game in succession to set up a final against Borris-Ileigh at a date to be confirmed.

Cul Camp: We had a huge turnout of 99 boys and girls for the annual Cul Camp in Moatfield last week. Thanks to Head Coach Tadhg O’Connor and all his coaches, including our own Michelle Mannion, for organising a fun-filled week of hurling, camogie and football.

Social Dancing: in the GAA Centre on Friday to the music of John Molloy. Dancing 9.30pm to 12.30am.