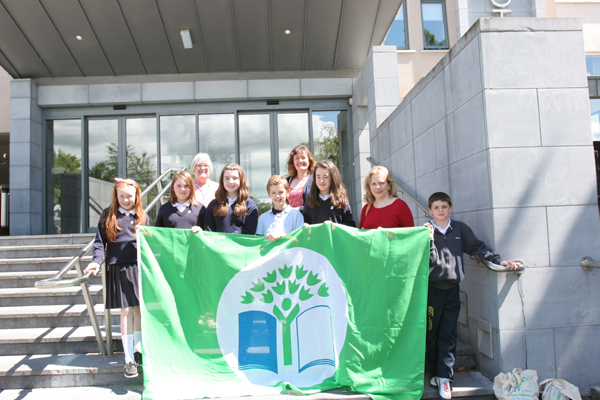 Congratulations to Lorrha N.S. and to Rathcabbin N.S. who were presented with their third Green Flag at an awards ceremony held in Kilkenny on Wednesday 21st May. Well done to all concerned. 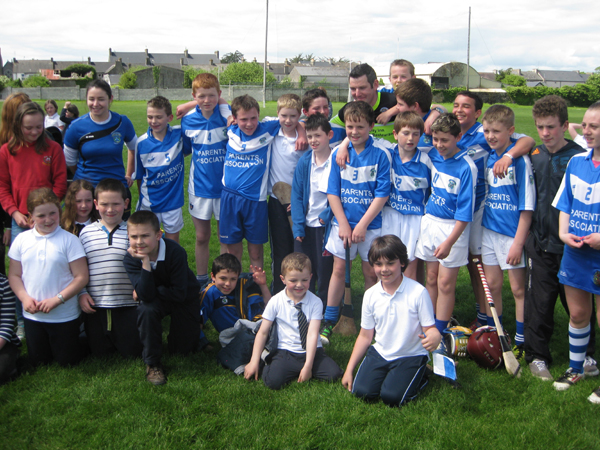 Lorrha/Redwood N.S. Hurling Team North Champions by the narrowest of margins. Well done all and the best of luck in the Co. Final in early June. 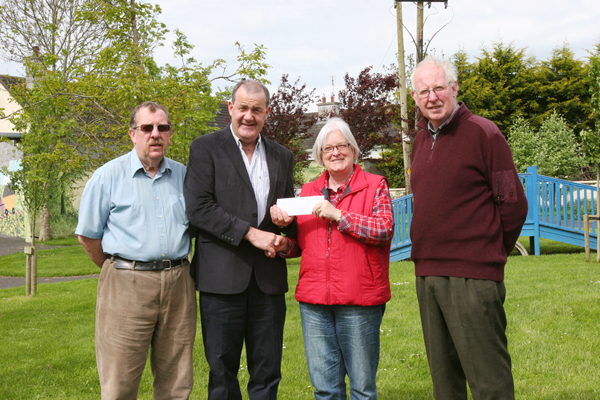 Councillor Ger Darcy presenting a cheque to Lorrha Development Chairperson Rose Mannion towards the new Friar’s Park in the Village. Also in the photograph is David Power, scheme worker and Louis McCormack, Treasurer.   The committee offer sincere thanks to Cllr. Ger for his contribution.

The sudden death occurred on Wednesday May 14th at his residence of Greg Hughes, Portland, Lorrha. A native of Cloghan, Greg was just 75 years of age. A key figure in the Offaly football emergence as a major force in the 1960s he was one of life’s gentlemen. One of the great full-backs of his era, he played a major role as Offaly won the Leinster championship for the first time in 1960, a title they retained in ’61. He added a third Leinster title in 1969. In 1971 he picked up a fourth Leinster medal and was part of the squad that brought the Sam Maguire Cup to Offaly for the first time. He also won three Railway Cups with Leinster, one as captain. He managed Offaly U-21s to a Leinster title in 1986 and later managed the senior team. He was inducted into the Offaly Hall of Fame in 2010.When his playing days ended he was part of the management team when Offaly won the Leinster U21 football title in 1986. His proudest moment was when he trained St Rynaghs who won the senior B Football Final in 1988 beating St John’s in the final.  He was a great servant of club and County. Greg kept in touch with Cloghan and his beloved St. Rynagh’s football club and often attended games and events there through the years. He started out his life as a Garda based in Kinnegad and came to live in Lorrha 40 years ago, working for a time with Con Hynes in Portumna managing dance bands before he was appointed to the ACC Bank in Ennis and later serving as Manager of the Nenagh branch before his transfer to Ballinasloe. Greg was always willing to help with training and brought the Gortanumera school team glory some years ago as well as coaching under 21 and Junior teams with Lorrha. In 1974/75 he served as Chairman of the Lorrha club and as a player he won a North medal too in ’75 with his adopted parish. He went on to become a good friend of Jimmy McGee and the All-Star teams and was part of the set up who raised money for different charitable organisations. In later years he took up golf and served as both President and captain of the Portumna Golf club.

Greg and Kathleen celebrated their 50th wedding anniversary just a month ago when their family gathered in the U.S. to celebrate this wonderful occasion with them. Deepest Sympathy is extended to his wife Kathleen, son Gregory (Dublin), daughters, Eimear, Trini, Aoife (U.S) and Niamh (Kildare), sister Eileen, relatives and a large circle of friends. After funeral Mass in St. Ruadhan’s Church, Lorrha on Monday last May 19th. Greg was laid to rest in the adjoining cemetery. May he rest in peace.

Well done to the Lorrha/Redwood hurling team who were crowned North champions after a thrilling final against Kilbarron on Wednesday 21st May. The team came away with a one point victory and we extend the best of luck to them and their mentors in the County Final which will take place in early June. We also extend congratulations to our Green Flag committee who were presented with the school’s third flag at the  awards ceremony which took place in Kilkenny also on Wednesday 21st.  Avie, Niamh and Scott represented our school on the day. Some of our students participated recently in the schools athletics which was held in Borrisokane. Well done to Caoimhe O’Meara who came second in 4th class group, Avie Darcy who featured in the Long Jump and went on to come 4th the finals of the Athletics, Caoimhe Claffey and Niamh Moran who did very well in the Shot Putt Throw. Well done to all our students who participated. We also congratulate our students who received their First Holy Communion in Rathcabbin Church on Sunday last May 18th.

Congratulations and well done to the Lorrha under 12 football team who were crowned County Champions on Saturday last in Templetuohy. Well done to both team and mentors.

Congratulations to Robert, Sarah, Grace, John, Sean, Celine, Maria, Emma and Mena  on receiving their First Holy Communion on Sunday. It was a lovely ceremony reflecting their preparation which was lead by the school choir.

Sport : The children have been very active with U11 & U13 hurling matches and well done to all who represented the school  in the recent athletics competition in Borrisokane. Tennis lessons continue every Wednesday for all children giving them an opportunity to learn a new sport.

Green Schools: Once again our hard work has paid off and we will soon be displaying our third green flag which we achieved for water conservation. All the children helped with the annual litter pick around the school and village which is great to create awareness of their environment.

Country Market: A date for your diary is June 15th with our next fundraiser which will include fresh produce for the school garden and chickens, with lots of home baking too.

An accredited Training Programme for Voluntary and Professional Youth Ministry Leaders will be held from Sept 2014 – Sept 2016(8 weekends over 2 years). Sponsored by the Redemptorists in Ireland and accredited by St. Mary’s University College (Q.U.B.) and the centre for Ministry Development in the U.S.A.  €50 Registration Fee.  Course will be partly subsidised.  For further information and Application form please contact Fr. Donagh O’Meara – mobile 087 2322140. Email : donaghomeara@gmail.com  or your local Parish.   www.killaloediocese.ie or www.ymsp.ie .

An used clothing collection will take place on Friday May 23rd from Lorrha Community Hall. This is the place to bring along your unwanted clothes, belts, shoes, handbags, curtains, blankets etc. All proceeds from this fundraiser will be used for the ongoing work around Lorrha village.

To mark the 75th anniversary of the Redwood N.S. a reunion will be held for all past pupils on Sat, 7th June. It will commence with an open school during the day from 3 – 4pm to view roll books, photos etc. A special mass will be held in Redwood Church at 7pm and buffet dance at 9.30p.m. in Moatfield with music by Pat & Richie followed by Tradstone. Eamon O’ Dywer will also be in attendance with Tipp FM down your way.Tickets €10.00 are on sale now or available on the night. All are welcome!!

U13’s:
The league is commencing this week playing Boherlahan on Tuesday evening gone in Boherlahan. Remaining fixtures are on Tuesday 27th playing Holycross at home, June the 10th playing Portroe. Best of Luck to the panel.

Underage Training:
Training will continue during the week, will receive details via text.

County Scene:
Well done to Courtney Houlihan and Michaela Young who played on Saturday in Charleville in Cork with the Under 13 Tipperary Camogie academy. Well done girls!

The Annual devotions to Our Lady of Clonfert continue throughout the month of May in Clonfert Church each evening with several guest speakers and visiting clergy.

An elderly gentleman had serious hearing problems for a number of years.. He went to the doctor and the doctor was able to have him fitted for a set of hearing aids that allowed the gentleman to hear 100%

The elderly gentleman went back in a month to the doctor and the doctor said, ‘Your hearing is perfect.. Your family must be really pleased that you can hear again.’
The gentleman replied, ‘Oh, I haven’t told my family yet.
I just sit around and listen to the conversations. I’ve changed my will three times!’