Michaela and Daniel unveil the art work by the children of Lorrha School relaying stories from the Bible. 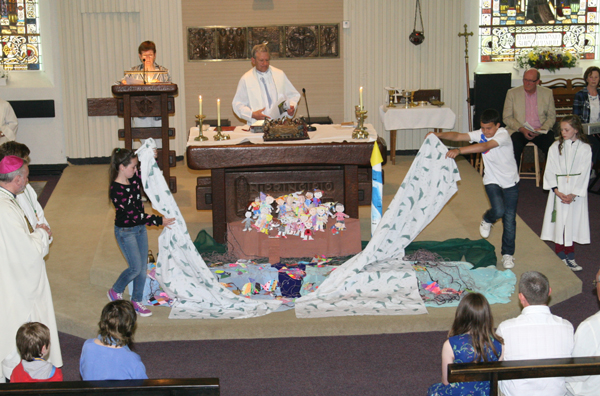 Uncovering a Story From The Bible.

The peaceful death took place on Thursday June 13th in the loving care of her family, of Katie Duggan, Portland, Lorrha. Born on the 13th September 1915 to Pat and Bridget Nolan, Kilroran, Ballygar, Co. Galway, the youngest of seven children, five girls and two boys. After finishing school in Ballygar she qualified as a dressmaker at Trainers dressmakers in Ballygar. She subsequently moved to employment in Clonmel with the Sisters of Charity at Morton Street. There she taught dressmaking to the pupils of the Convent School during the 1930’s. On returning to her native Co. Galway later, she found employment at Shiels Shop, General Merchants at Ballishrule where she continued to dressmake. It was while working in Shiels that she met her future husband Tom Duggan from Ballinakill, Moyglass, Loughrea. Tom was a carpenter with Mick Shiels who operated as a building business from the same address. She and Tom married n 1946 and moved to live in Portland, Lorrha where they bought a house and small holding of land. Katie frequently cycled the forty miles from Portland to Ballygar to visit her parental home.
Tom and Katie raised nine children despite the fact that Tom suffered serious illness in the 1950’s which necessitated brain surgery at The Mater Hospital, Dublin. Katie however continued her dressmaking business from her home in Portland where she trained young girls to the dressmaking profession along with caring for and nursing her sick husband back to health and raising her young family. Tom predeceased her on April 17th 2003. In January 2009 Katie suffered a stroke which resulted in her requiring full time care which was provided in her own home by her family assisted by wonderful Carers. Katie enjoyed a reasonably good quality of life until very recently.
Also predeceased by her daughter Mary Spillane on 28th October 2007, Katie is survived by her sons P.J. (Lorrha), Thomas ( Clonmel), John (Drogheda), Oliver and Hubert (Lorrha), daughters Brigid and Kathleen (Dublin), Carmel (Galway), grandchildren, great-grandchildren, sons-in-law, daughters-in-law, brothers-in-law, sister-in-law, nephews, nieces, relatives, friends and neighbours to whom sympathy is offered. After funeral Mass in St. Ruadhan’s Church Lorrha on Sunday 16th burial took place afterwards in Calvary Cemetery, Portumna. May her gentle soul rest in peace.

The Festival committee wish to extend thanks to everyone who helped in whatever way to make the Gathering festivities so successful. It was indeed wonderful to see so many visitors to our parish over the six day event and we hope that all enjoyed their stay here.

Congratulations and best wishes is extended to Barbara Dunne Tierney, Portland and Terryglass who graduated recently in Carlow where she completed a course in Fetac Level 5 health care support and care of the elderly. Well done Barbara and every good wish for the future.

Lorrha Development Association wish to express thanks to all who participated, helped and supported the unveiling of the Memorial plaque to Lorrha native Martin O’Meara V.C. on Sunday last. A special word of thanks to the Ormond branch of O.N.E. to the members of the Lorrha Variety group, Ger O’Meara, Tony Coen, Darren Bourke, Anne-Marie Hough, Geraldine Maher and to Mayor Michael O’Meara for all his help. We also extend many thanks to all the workers on the day, Noreen Ryan and Tradstone and Jackie and Tony Hogan for providing refreshments afterwards.

Congratulations and well done to Caoimhe and Muire Kennedy and the Tipperary Intermediate team on their three point victory over Wexford on Saturday last in the first round of the championship. Caoimhe had a excellent game and she can indeed be very satisfied with her performance. Well done girls.

There is a Health Talk on this Thursday at 8pm in Dooly’s Hotel in Birr.
Are you suffering from low Energy? Are you stressed?
Is your immune system at an all time low?
If you want to regain vitality and zest for life this is the talk for you.
A talk by John Baldwin, How the foods we eat today can dramatically have an impact on your health.
John Baldwin has spent the last 13 years working and studying alternative healing methods. He has given many lectures to Elite Athletes, Marathon Runners, Triathletes, Rugby Players,Coaches, Personal Trainers.

A man was driving home from work one evening when his wife rings him on his mobile. ‘Honey’ she says in a worried voice, ‘be careful’. I just heard on the news that there’s some lunatic driving the wrong way down the motorway’.
‘It’s worse than that’ he replies, ‘There are hundreds of them’.