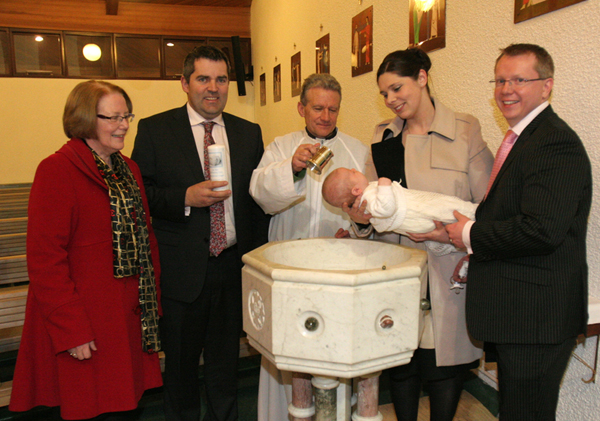 Baby Oisin Duggan, son of Denis and Caitriona, Kilcarron, Lorrha was baptized during the Easter Saturday evening ceremony which took place in Our Lady Queen of Ireland Church, Rathcabbin. Oisin is pictured here with his parents, Fr. Pat Mulcahy P.P. who performed the ceremony,  godparents James O’Sullivan and Geraldine Duggan.

The peaceful death occurred on Tuesday March 26th in the Galway Clinic of Roger Hussey, White Thorns, Lorrha.  Born and raised in England, Roger would have celebrated his 68th birthday on April 2nd had he lived. An antique dealer for most of his life, he was happy when he was buying, selling and he thoroughly enjoyed the barter that came with the job. He loved restoring old furniture and meeting people in his shop where many a story was swapped. When retirement was considered, he and his wife Liz came to reside in Ireland 16 years ago, first to Athlone where they bought a small farm on the Shores of Lough Ree which they continued to work, breeding sheep, as well as establishing a very popular Bed and Breakfast business. When they disposed of their business interests altogether, they chose to come to Lorrha where they have spent the last six years. Roger was a private gentleman who enjoyed the company of friends as he smoked one of his collection of pipes and he was always very welcoming. He had a great sense of humour and when you least expected, he could recall a lighter moment from life which he enjoyed sharing.

His remains will be reposing on Wednesday the 3rd of April at Dignity Chapel, in Portumna Retirement Village, Portumna, from 5.30pm to 7pm. Service and Cremation on Thursday at 3pm in Mount Jerome Crematorium, Harold’s Cross, Dublin. No flowers please by request. Donations if desired to the Irish Cancer Society.

Sincere sympathy is extended to his wife Liz, son Mark, family and friends. May he rest in peace.

We saw you getting tired, and a cure was not to be,

So we put our arms around you and whispered, You can lean on me.

With tearful eyes we watched you, and saw you pass away.

Although we loved you dearly, we could not make you stay.

A golden heart stopped beating and pain was laid to rest,

Some one out there broke our hearts to prove to us,

They only take the best

Lorrha Development Association extends sympathy to Vice Chairperson Liz Hussey on the death of her husband Roger which occurred on Tuesday March 26th.  May he rest in peace.

The peaceful death took place on Wednesday March 27th in St. Kieran’s Nursing home Rathcabbin of Julia Larkin, Yard Hill, Redwood.  Nee Kennedy, Julia who was 89 years old was born and raised in Redwood and continued to farm there till recent years. The youngest of seven girls and the last remaining member of the Kennedy family, Julia had a condition that needed caring for and after some time of care with her niece Peggy Mills, she moved to St. Kieran’s Nursing home in Rathcabbin where she had resided since the death of her husband Pat in 1996.

Her remains were removed to St. Ruadhan’s Church Lorrha on Saturday morning 30th and after the liturgy of the Word, burial took place in the adjoining cemetery. Sympathy is extended to her nieces, nephews, relatives and friends on their loss.May she rest in peace.

The next meeting of the Lorrha and Dorrha Heritage Festival will take place on Monday night April 8th in Lorrha Community Hall at 8.30p.m. The committee would welcome your input so do come along. A calendar of proposed events can be viewed on the parish web site www.lorrhadorrha.ie.

There will be no meeting on Wednesday April 10th. Instead the group will have a meal in Portumna Golf course at 2.00p.m. followed with music by Pat. All members welcome.

During summer time, Vigil Mass will be celebrated on Saturday night in RedwoodChurch commencing April 6th at 8.00p.m. on Sunday in LorrhaChurch at 10.00a.m. and in Rathcabbin at 11.30a.m.

First Friday Mass on April 5th will be celebrated in Lorrha at 9.30a.m. and in Rathcabbin at 8.00p.m.

Congratulations is extended to baby Oisin Duggan Kilcarron, Lorrha who was baptized during the Easter Saturday night ceremony which was held in Our Lady Queen of Ireland Church Rathcabbin. Son of Denis and Caitriona, Oisin is a brother to James. Well done to the Duggan family.

Commiserations is extended to Aidan and Pauline McIntyre, son Niall and Maria Brophy who were unlucky in their bid to claimed the Co. Quiz Champions prize in the County GAA quiz which was held on Thursday 28th  in The Dome, Thurles. However, the foursome is happy with their performance overall which claimed the second position for them which wasn’t bad at all.

Social dancing continues in the GAA clubhouse on Friday night April 5th with Dermot Lyons providing the music. Dancing from 9.30p.m. to 12.30a.m.

A conversation in heaven

SYLVIA:
I froze to death.

SYLVIA:
It wasn’t so bad. After I quit shaking from the cold, I began to get warm & sleepy,
and finally died a peaceful death. What about you?

WANDA:
I died of a massive heart attack. I suspected that my husband was cheating, so I came home early to catch him in the act. But instead, I found him all by himself in the den watching TV.

SYLVIA:
So, what happened?

WANDA:
I was so sure there was another woman there somewhere that I started running all over the house looking. I ran up into the attic and searched, and down into the basement. Then I went through every closet and checked under all the beds. I kept this up until I had looked everywhere, and finally I became so exhausted that I just keeled over with a heart attack and died.

SYLVIA:
Too bad you didn’t look in the freezer —we’d both still be alive.