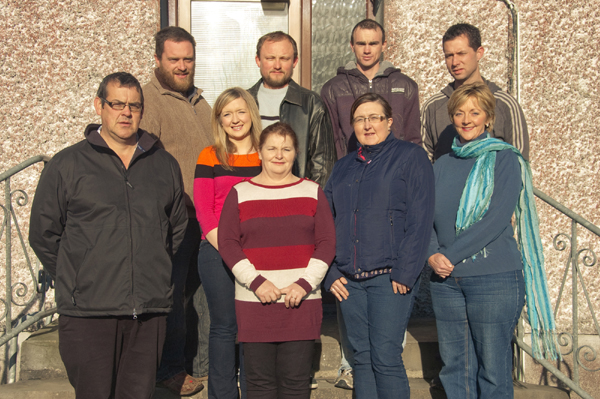 Lorrha Variety Group presents ‘Wanted – One Body’  by Charles Dyer in Lorrha Community Hall on 18th 19th & 20th January at 8.30pm. Directed by Mary T. Hynes, Wanted – One Body is a murder mystery farce, featuring a cast of suspicious characters. The wealthy Mr. Barraclough has passed away and the solicitors Blundell and Mickleby arrive at the house to read the will.  Family and faithful servants wait with baited breath to hear the last will and testament, only to discover that this death holds nothing but surprises! A clause in the will granting a portion of the inheritance to the servants sets the house into turmoil.  As the flood waters rise, confusion reigns and the body count increases in this farcical chiller,  Blundell and Mickelby find themselves having to piece together the clues to find the culprit. This three act play is a classic who-dunnit, a thriller with fun for audience and actors alike. WANTED – One body! … But whose will it be?

Pictured here are members of the cast:

Pat resided with her son Leslie and family in Annagh, Lorrha since she became ill in July 2011 and it was there that she passed away peacefully surrounded by her family.

Born Patricia Shier in 1924 on a small farm in Ballingrane, Co.Limerick– the youngest of five children. At the age of 15 she got her first job working in a drapery shop in Ballydehop, Co.Corkand later she was to work in Cloughjordan and Edenderry. In 1954 she married George Harding and they both operated a successful grocery and off licence on Birr’sMain Street. Together they worked hard and built up a steady trade and a loyal cliental through the years. They were popular with their customers, friendly, courteous and chatty and were very well liked in the town. George passed away in 1982 but Pat continued to run the business with her son Joseph until 1999. Pat was a very active member of her church and recently received a certificate for 50 years membership in Birr Mother’sUnion. On her retirement, she went to live in Woodlands, and became an active member of St. Brendan’s Market inTownsend Street.

She will be sadly missed by all who knew her but in particular by her family. Sympathy is extended to her sons Leslie and Joseph, daughter Carol, daughters in-law Rose and Noeleen, son in law Bob, grandchildren Mark, George and Allie, sister in law Muriel, nephews, nieces and her many and dear friends.  After funeral service in St. Brendan’s Churchof Ireland Birron Thursday 3rd. burial took place in Aglish Cemetery, Borrisokane. May she rest in Peace.

The only courses approved in the Diocese are the Accord Courses, the Esker pre-marriage weekend and the Mount Argus Course inDublin. Couples should be informed of this when they first book their wedding. Parish secretaries who may take bookings for weddings should also be asked to pass this information to the couple. The Diocese does not accept On Line Pre-Marriage Courses or courses which are supplied on CD/DVD as sufficient preparation for the Sacrament. Courses which appear to be given by Fr. Vincent Twomey SVD are also not accepted as his name is being used against his consent.

The Lorrha Parish Calendar is still on sale throughout the parish and it’s not too late to purchase a copy. Packed from cover to cover with photo’s from the past and the present, it’s a lovely keepsake. All money raised goes back into the continuing work aroundLorrhaVillage.

Lorrha variety group presents an amateur production of “Wanted one body” by Raymond Dyer. Directed by Mary Hynes the play will be staged in Lorrha Community Hall on the 18th 19th & 20th January at8.30pm.

Greenacres – family home to the late Charles Barraclough and the icing on the cake for his future heirs. But who stands to inherit his millions and will it be by foul means or fair? Family and faithful servants wait with baited breath to hear the last will and testament, only to discover that this death holds nothing but surprises! As the flood waters rise, confusion reigns and the body count increases in this farcical chiller. It’s a classic whodunnit, with mysterious long lost relatives, brooding butlers and Hector (the faithful family guinea pig!) Who will be the next victim, and is Charles Barraclough really even dead? Only time will tell… WANTED – one body! … But whose will it be?

A very important meeting to organize and plan events for  “The Gathering” 2013 in our parish will take place on Monday 14th. It is proposed to run with the event from 19th to 24th June which will be called “The Lorrha and Dorrha Heritage Festival.”  A meeting will be held on Mon. 14th January at 8.OOp.m.in the GAA Centre and this meeting will offer an opportunity to everyone in the parish to participate and get involved. The proposed festival will offer an opportunity to all who were once part of our parish life to reunite and relish the experience of this “welcome home: week-end. All interested parishioners is requested to attend this important meeting.

Rehearsals are in full swing down Rathcabbin way for the forthcoming comedy by the local drama group “The Two Loves of Gabriel Foley” by playwrite Jimmy Keary. The play will be staged in Rathcabbin Hall from Thursday night January 24th to Sunday night 27th. at 8.30p.m. Booking is advisable and the booking line will be open from Wednesday 16th so you can call (087) 2360096 between 6.00 and9.00pm only please to book your seat. So make it a date for Rathcabbin Hall and you won’t be disappointed.

After getting all of Pope Benedict’s luggage loaded into the limo, (and he doesn’t travel light), the driver notices the Pope is still standing on the curb.

‘Excuse me, Your Holiness,’ says the driver, ‘Would you please take your seat so we can leave?’

‘Well, to tell you the truth,’ says the Pope, ‘they never let me drive at the Vatican when I was a cardinal, and I’d really like to drive today.’

‘I’m sorry, Your Holiness, but I cannot let you do that. I’d lose my job! What if something should happen’ protests the driver, wishing he’d never gone to work that morning.

‘Who’s going to tell’ says the Pope with a smile.

Reluctantly, the driver gets in the back as the Pope climbs in behind the wheel. The driver quickly regrets his decision when, after exiting the airport, the Pontiff floors it, accelerating the limo to 205 kms. (Remember, the Pope is German.)

‘Please slow down, Your Holiness’ pleads the worried driver, but the Pope keeps the pedal to the metal until they hear sirens.

The Pope pulls over and rolls down the window as the cop approaches, but the cop takes one look at him, goes back to his motorcycle, and gets on the radio.

‘I need to talk to the Chief,’ he says to the dispatcher.

The Chief gets on the radio and the cop tells him that he’s stopped a limo going 205 kph.
‘So bust him,’ says the Chief.

‘I don’t think we want to do that, he’s really important,’ said the cop.

The Chief exclaimed, ‘All the more reason!’

‘No, I mean really important,’ said the cop with a bit of persistence..

The Chief then asked, ‘Who do you have there, the mayor?’

The Chief is even more puzzled and curious, ‘What makes you think it’s God?’

Cop: ‘His chauffeur is the Pope!’